25 Sacred Places You Have to Visit 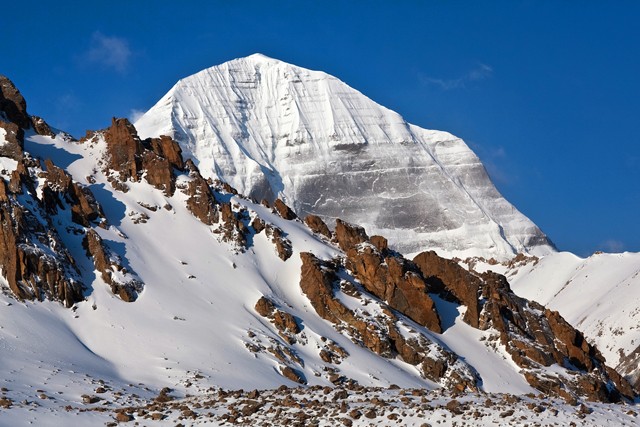 Here is a look at some of the world’s most sacred and revered locations. They attract religious pilgrims from around the globe for their spiritual significance but are worth visiting both for their beauty and a chance to catch a glimpse of what drives the local culture. Some of the locations that made out list are ancient wonders of the world such as Machu Picchu in Peru and the stone temples of Abu Simbel which had spiritual significance at the time but are now archaeological sites. Other locations such as Mount Kailash in Tibet and Batu Caves in Malaysia made the list due to the natural beauty. Here is a look at the 25 most sacred places to visit:

The Ganges, also Ganga, is a trans-boundary river of Asia which flows through India and Bangladesh. The Ganges is the most sacred river to Hindus. It is also a lifeline to millions of Indians who live Along its course and depend on it for their daily needs. It is worshipped as the goddess Ganga in Hinduism.

Strictly forbidden for non-Muslims to enter this city, Mecca is the holiest of all cities in Islam. A pilgrimage to Mecca, which is commonly known as Hajj, is obligatory for all Muslims with financial and physical ability. Over 3 million Muslims from all around the World visit Mecca during the months of Dhu’l-Hijjah every year.

It is the most sacred Buddhist pagoda for the Burmese with relics of four past Buddhas enshrined within: the staff of Kakusandha, the water filter of Koṇāgamana, a piece of the robe of Kassapa and eight strands of hair from Gautama. Uppatasanti Pagoda is an exact replica of Shwedagon Pagoda in Naypyidaw, the capital of Burma.

Machu Picchu is a 15th-century Inca site located 2,430 metres (7,970 ft) above sea level. It is located in the Cusco Region, Urubamba Province, Machupicchu District in Peru. It is situated on a mountain ridge above the Sacred Valley which is 80 kilometres (50 mi) northwest of Cuzco and through which the Urubamba River flows. Most archaeologists believe that Machu Picchu was built as an estate for the Inca emperor Pachacuti (1438–1472).

Lourdes is a small market town lying in the foothills of the Pyrenees, famous for the Marian apparitions of Our Lady of Lourdes occurred in 1858 to Bernadette Soubirous. At that time, the most prominent feature of the town was the fortified castle that rises up from a rocky escarpment at its centre.

Vatican City is home to some of the most famous art in the world. St. Peter’s Basilica, whose successive architects include Bramante, Michelangelo, Giacomo della Porta, Maderno and Bernini is a renowned work of Renaissance architecture. The Sistine Chapel is famous for its frescos, which include works by Perugino, Domenico Ghirlandaio and Botticelli.

The Holy City of Jerusalem is one of the oldest cities in the World and has great religious importance amongst Jews, Christians and Muslims. The numerous religious and historical sites dotted around the city attract millions of tourists every year from around the world. The Western Wall also known as The Wailing Wall is one the most significant Jewish religious sites.

Bethlehem, a center of Palestinian culture and tourism is an important destination for Christians, Jews and Muslims. Considered as one of the most pious cities in the globe, Bethlehem is the birth place of Jesus and King David. Several religious sites dotted across the city attract tourists as well as religious pilgrims from around the World. The Church Of The Nativity is one of top tourist attractions in Bethlehem.

The Abu Simbel temples are two massive rock temples at Abu Simbel, a village in Nubia, southern Egypt, near the border with Sudan. They are situated on the western bank of Lake Nasser, about 230 km southwest of Aswan (about 300 km by road). The complex is part of the UNESCO World Heritage Site known as the “Nubian Monuments,” which run from Abu Simbel downriver to Philae (near Aswan).

The Harmandir Sahib also Darbar Sahib and informally referred to as the Golden Temple is a prominent Sikh Gurdwara located in the city of Amritsar, Punjab, India. It was built by the fifth Guru of the Sikhs, Guru Arjan Dev, in the 16th Century. In 1604, Guru Arjan Dev ji completed the Adi Granth, the holy scripture of Sikhism, and installed it in the Gurdwara.

Notre-Dame Basilica is a basilica in the historic district of Old Montreal, in Montreal, Quebec, Canada. The church is located at 110 Notre-Dame Street West, at the corner of Saint Sulpice Street. It is located next to the Saint-Sulpice Seminary and faces the Place d’Armes square. The church’s Gothic Revival architecture is among the most dramatic in the World.

The Church of San Vitale styled an “ecclesiastical basilica” in the Roman Catholic Church, though it is not of architectural basilica form is a church in Ravenna, Italy, one of the most important examples of early Christian Byzantine Art and architecture in western Europe. The building is one of eight Ravenna structures inscribed on the UNESCO World Heritage List.

Bodh Gaya or Bodhgaya is a religious site and place of pilgrimage associated with the Mahabodhi Temple Complex in Gaya district in the Indian state of Bihar. It is famous for being the place where Gautama Buddha is said to have obtained Enlightenment The name Bodh Gaya did not come into use until the 18th century.

Delphi is both an archaeological site and a modern town in Greece on the south-western spur of Mount Parnassus in the valley of Phocis. In Greek mythology, Delphi was the site of the Delphic oracle, the most important oracle in the classical Greek World, and a major site for the worship of the god Apollo after he slew the Python, a dragon who lived there and protected the navel of the Earth.

Angkor Wat is a temple complex in Cambodia and the largest religious monument in the World. It was originally founded as a Hindu temple for the Khmer Empire, gradually transforming into a Buddhist temple toward the end of the 12th century. s the best-preserved temple at the site, it is the only one to have remained a significant religious center since its foundation.

Teotihuacan is an enormous archaeological site in the Basin of Mexico, just 30 miles (48 km) northeast of Mexico City, containing some of the largest pyramidal structures built in the pre-Columbian Americas. Apart from the pyramidal structures, Teotihuacan is also known for its large residential complexes, the Avenue of the Dead, and numerous colorful, well-preserved murals.

Borobudur, is a 9th-century Mahayana Buddhist Temple in Magelang, Central Java, Indonesia. The monument consists of six square platforms topped by three circular platforms, and is decorated with 2,672 relief panels and 504 Buddha statues. A main dome, located at the center of the top platform, is surrounded by 72 Buddha statues seated inside a perforated stupa.

Mount Kailash is a peak in the Kailas Range, which are part of the Transhimalaya in Tibet. It lies near the source of some of the longest rivers in Asia: the Indus River, the Sutlej River, the Brahmaputra River, and the Karnali River . It is considered a sacred place in four religions: Bön, Buddhism, Hinduism and Jainism.

Stonehenge is a prehistoric monument located in the English county of Wiltshire, about 2.0 miles (3.2 km) west of Amesbury and 8 miles (13 km) north of Salisbury. One of the most famous sites in the World, Stonehenge is composed of a circular setting of large standing stones surrounded by earthworks.

Boudhanath is a stupa in Kathmandu, Nepal. The Buddhist stupa of Boudhanath dominates the skyline. The ancient Stupa is one of the largest in the World. This Bauddha stupa was built just after the demise of Lord Buddha and is largest single Chhyorten in the world. Many Kilograms of gold were used in the decoration of the holy building.

Often called the Tiger’s Nest, perched on the cliffs, has awestruck many a visitor. “Trip to Bhutan is never complete without climbing to Taktsang”, says one tourist. Indeed it’s true as the journey there fills you with spiritual bliss. For those not choosing the spiritual side it is the dramatic, artistically built monument that becomes a hiker’s delight.

Batu Caves is a limestone hill that has a series of caves and cave temples in the Gombak district, 13 kilometres north of Kuala Lumpur, Malaysia. It takes its name from the Sungai Batu, which flows past the hill. Batu Caves is also the name of the nearby village. The cave is one of the most popular Hindu shrines outside India, and is dedicated to Lord Murugan. It is the focal point of Hindu festival of Thaipusam in Malaysia.

The Spanish Synagogue is a Moorish Revival synagogue built in Prague in 1868 to the design of Vojtěch Ignátz Ullmann. The facade copies the form of the Leopoldstädter Tempel, built in Vienna, Austria, in 1853, a tripartite facade with a tall central section flanked by lower wings on each side.

The Papal Basilica of Saint Peter in the Vatican, officially known in Italian as Basilica Papale di San Pietro in Vaticano and commonly known as Saint Peter’s Basilica, is a Late Renaissance church located within Vatican City. Designed principally by Bramante, Michelangelo, Carlo Maderno and Bernini, St Peter’s is the most renowned work of Renaissance architecture and remains one of the largest churches in the World.

The Tiger Cave Temple is a Buddhist temple located northeast of Krabi, Thailand. One of the most sacred Buddhist sites in the province, it is well known for the tiger paw prints in the cave, tall Buddha statues and the strenuous flight of stairs to reach the summit. The Tham Sua temple is a Thai Buddhist meditation center and also has places of archaeological and historical significance.