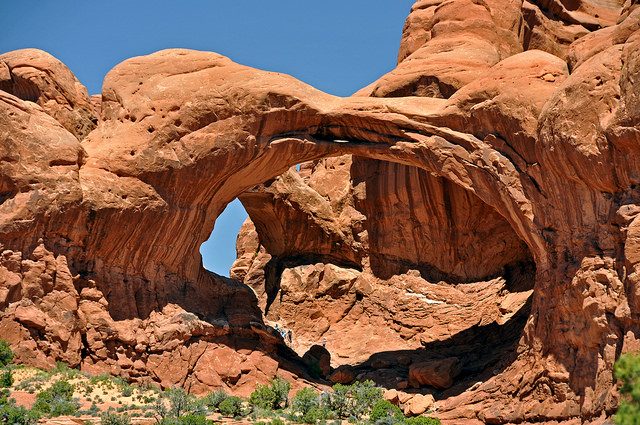 Natural bridges and arches carved out of the solid rock by years of erosion are spectacular geologic phenomena. Natural bridges are formed when a steam undercuts a meander in a canyon and eventually after many years erodes essentially a new course through the rock leaving a natural bridge above. Arches are similar to Natural Bridges but form as a result of wind and water erosion and since they do not bridge a waterway they are easily distinguished. Here is a look at some of the most spectacular of these features.

Arches National Park is a US National Park in eastern Utah. The park is located on the Colorado River 4 miles (6 km) north of Moab, Utah. It is known for containing over 2,000 natural sandstone arches, including the World-famous Delicate Arch, in addition to a variety of unique geological resources and formations.

Étretat is best known for its cliffs, including three natural arches and the pointed “needle”. These cliffs and the associated resort beach attracted artists including Eugène Boudin, Gustave Courbet and Claude Monet, and were featured prominently in the 1909 Arsène Lupin novel The Hollow Needle by Maurice Leblanc.

The Pont d’Arc is a large natural bridge, located in the Ardèche département in the south of France, 5 km from the town of Vallon-Pont-d’Arc. The arch, carved out by the Ardèche River, is 60 m wide and 54 m high. It is a very popular canoeing and kayaking area and is heavily visited by tourists. It is usually described as the natural entrance to the Ardèche Canyon.

The arch of Cabo San Lucas, is a distinctive rock formation at the southern tip of Cabo San Lucas, which is itself the extreme southern end of Mexico’s Baja California Peninsula. The arch is locally known as El Arco in the town of Cabo San Lucas. It is here that the Pacific Ocean becomes the Gulf of California. This area is widely used in hotel advertising in the Los Cabos Corridor. This spot is a popular gathering area for sea lions.

La Portada is a natural arch on the coast of Chile, 18 km (11 mi) north of Antofagasta. It is one of fifteen natural monuments included among the protected areas of Chile. There is another similar but smaller structure in the spa town of Pucatrihue, Osorno Province. The La Portada Natural Monument covers an area of 31.27 hectares (77.27 acres), and its geomorphological features and remaining fossils stand out in the form of an arch.

Tianmen Mountain is a mountain located within Tianmen Mountain National Park, Zhangjiajie, in northwestern Hunan Province, China. A cablecar was constructed by the French company Poma from nearby Zhangjiajie railway station to the top of the mountain. Tianmen Mountain Cableway is claimed in tourist publications as the “longest passenger cableway of high mountains in the World”, with 98 cars and a total length of 7,455 metres (24,459 ft) and ascent of 1,279 metres (4,196 ft) The highest gradient is an unusual 37 degrees.

Moon Hill is a hill with a natural arch through it a few kilometers outside Yangshuo in southern China’s Guangxi autonomous region. It is so named for a wide, semicircular hole through the hill, all that remains of what was once a limestone cave formed in the phreatic zone. Like most formations in the region, it is karst. It is also a popular tourist attraction. It takes roughly 20 minutes to climb (about 800 steps) to the arch, or considerably longer for those who mean to reach the hill’s summit.

Durdle Door (sometimes written Durdle Dor) is a natural limestone arch on the Jurassic Coast near Lulworth in Dorset, England. It is privately owned by the Welds, a family who owns 12,000 acres (50 sq km) in Dorset in the name of the Lulworth Estate. It is open to the public. The form of the coastline around Durdle Door is controlled by its geology-both by the contrasting hardnesses of the rocks, and by the local patterns of faults and folds.

The Azure Window is a limestone natural arch on the Maltese island of Gozo. It is situated near Dwejra Bay on the Inland Sea. The formation, which was created after two limestone sea caves collapsed, is popular with scuba divers. The Azure Window is made of a Maltese limestone known as Globigerina. This is the second oldest rock found on the islands covering almost 70% of its area.

Ayres Natural Bridge Park is a county park in Converse County, Wyoming in the United States. It occupies 150 acres (0.6 km²) between the towns Glenrock and Douglas about 6 kilometers south of Interstate 25 exit 151. The park’s name is derived from the rock formation of the same name. Over the course of millions of years, a bend in LaPrele Creek (originally known as Bridge Creek) wore away at a wall of solid rock, creating a natural opening.

Ayres Natural Bridge Park is a county park in Converse County, Wyoming in the United States. It occupies 150 acres (0.6 km²) between the towns Glenrock and Douglas about 6 kilometers south of Interstate 25 exit 151. The park’s name is derived from the rock formation of the same name. Over the course of millions of years, a bend in LaPrele Creek (originally known as Bridge Creek) wore away at a wall of solid rock, creating a natural opening.

London Arch (formerly London Bridge) is an offshore natural arch formation in the Port Campbell National Park, Australia. The arch is a significant tourist attraction along the Great Ocean Road near Port Campbell in Victoria. This stack was formed by a gradual process of erosion, and until 1990 formed a complete double-span natural bridge.

The Pravčická brána is a narrow rock formation located in the Bohemian Switzerland in the Czech Republic. With a span of 26.5 metres, an inside height of 16 metres, 8 metre maximum width and 3 metre arch, it is the largest natural sandstone arch in Europe, and one of the Most striking natural monuments in the Elbe Sandstone Mountains.

Wadi Rum also known as The Valley of the Moon is a valley cut into the sandstone and granite rock in southern Jordan 60 km (37 mi) to the east of Aqaba; it is the largest wadi in Jordan. The name Rum most likely comes from an Aramaic root meaning ‘high’ or ‘elevated’. To reflect its proper Arabic pronunciation, archaeologists transcribe it as Wadi Ramm.