8 Giant Meteor Craters You Can Visit 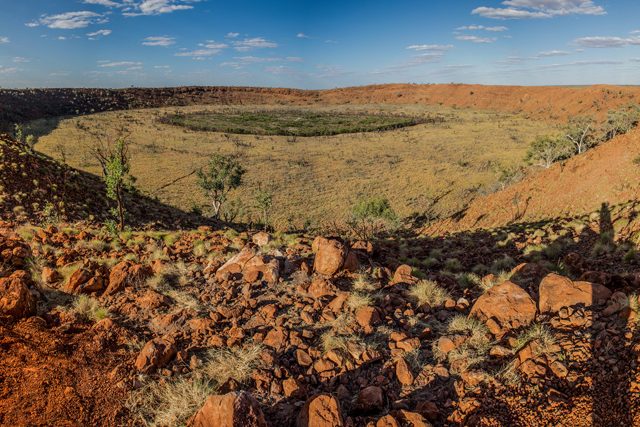 Wolfe Creek Crater is a well-preserved meteorite impact crater in Western Australia. It is accessed via the Tanami Road 150 km (93 mi) south of the town of Halls Creek. The crater is central to the Wolfe Creek Meteorite Crater National Park. The crater averages about 875 metres in diameter, 60 metres from rim to present crater floor and it is estimated that the meteorite that formed it had a mass of about 50,000 tonnes.

Amguid is a meteorite crater in Algeria. It is approximately 500 – 530 m in diameter, approximately 65 m deep and the age is estimated to be less than 100,000 years and is probably Pleistocene. The crater is exposed at the surface. Crater was discovered by Europeans in 1948, first scientific description was made by Jean-Phillippe Lefranc in 1969.

The Pingualuit Crater, formerly called Chubb Crater and later New Quebec Crater (cratère du Nouveau-Québec), is a young impact crater, by geological standards, located on the Ungava Peninsula, in the administrative region of Nord-du-Québec, in Quebec, in Canada. It is 3.44 km (2.14 mi) in diameter, and is estimated to be 1.4 ± 0.1 million years old (Pleistocene).

Tswaing is an impact crater in South Africa. It is situated 40 km to the north-west of Pretoria. This astrobleme is 1.13 km in diameter and 100 m deep and the age is estimated to be 220,000 ± 52,000 years (Pleistocene). The impactor is believed to have been a chondrite or stony meteorite some 30 to 50 m in diameter that was vaporized during the impact event.

Gosses Bluff (Gosse’s Bluff) is thought to be the eroded remnant of an impact crater. It is located in the southern Northern Territory, near the centre of Australia, about 175 km (109 mi) west of Alice Springs and about 212 km (132 mi) to the northeast of Uluru (Ayers Rock). It was named by Ernest Giles in 1872 after Australian explorer William Gosse’s brother Henry, who was a member of William’s expedition.

Monturaqui is a meteorite crater in Chile. It is located south of the Salar de Atacama, in the Antofagasta Region. The crater is exposed at the surface, and is 350–370 m (1,150-1,210 ft) in diameter and approximately 34 m (112 ft) deep. The impact that created the crater is estimated to have occurred approximately 660,000 years ago, during the Pleistocene Epoch.

Lonar Lake is a saline soda lake located at Lonar in Buldhana district, Maharashtra, India, which was created by a meteor impact during the Pleistocene Epoch and it is the only known hyper velocity impact crater in basaltic rock anywhere on earth. This lake, which lies in a basalt impact structure, is both saline and alkaline in nature. Geologists, ecologists, archaeologists, naturalists and astronomers have published studies of various aspects of this crater lake ecosystem.

Kaali is a group of 9 meteorite craters in the village of Kaali on the Estonian island of Saaremaa. Most recent estimates put its formation to 3500 ± 40 years ago. Previously, it was thought the craters formed more than 4,000 years ago, and possibly as long as 7,600 years ago (estimates vary). It was created by an impact event and is possibly the only known major impact event that has occurred in a populated area.