The 8 Best Volcanoes to Climb in East Africa 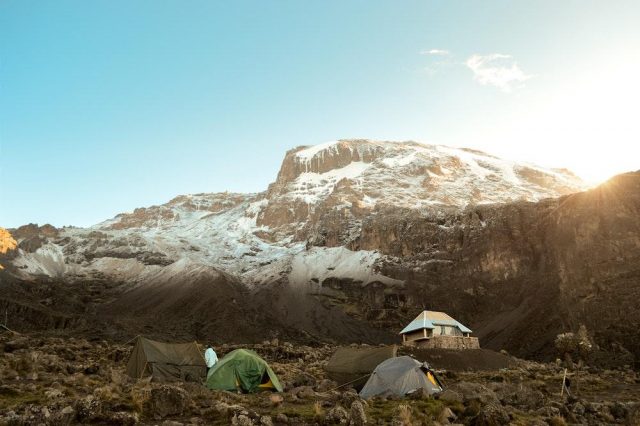 Africa has much to offer those willing and brave enough to venture to this beautiful continent. Many activities are at every tourist’s disposal, including safaris deep into the Serengeti, shopping in the many local markets and bazaars, or even a visit to one of the many pristine beaches found in the North and South.

All of these are great options to consider during one’s trip, but nothing will be quite as memorable as a climb to the top of some of the most beautiful (and still active) volcanoes this side of the world has to offer.

The most well-known Kilimanjaro is talked about and often frequented by climbing enthusiasts from around the world.

Below are the 8 best volcanoes you have to climb during your next trip to Africa.

Kilimanjaro is a great place for intermediate climbers since technical skills or special equipment are not a requirement to be able to complete the climb. Rather, one must simply be in great physical condition and be able to undertake extreme physical exertion during this climb.

Starting at the bottom, you’ll have six different routes you can choose to take, all of which include their own level of difficulty. Choose accordingly, as not only the difficulty varies, but also the scenery you’ll be taking in during your climb to the top.

Mount Meru – Known as Mount Kilimanjaro’s Neighbor
Known as Kilimanjaro’s neighbor, Mount Meru is the second-highest mountain in Tanzania measuring in at nearly 4,565 meters high. Living in the shadows of Kilimanjaro’s legacy, Mount Meru offers an excellent climb with both impressive views and a diverse rainforest that will accompany you for most of your journey.

For climbers who wish to climb Kilimanjaro, Mount Meru is an excellent starting point to first become accustomed since both ranges are quite similar to one another. Expect the full climb to require between 3-4 days.

Mount Kenya – East Africa’s Most Difficult Volcano to Climb
Kenya’s highest mountain, Mount Kenya, has its highest peak measuring in at roughly 5200 meters. This extinct volcano is considered as East Africa’s most difficult technical climb, requiring climbers between a half week and up to a full week to complete.

Mount Elgon – Packed with Caves, Gorges and Waterfalls
Mount Elgon sits between the borders of both Kenya and Uganda, and contains 5 total peaks. The two highest peaks include Wagagai (4,321 meters high, located on the Uganda side) and Sudek (4,301 meters high, and found in Kenya). Packed with caves, gorges and waterfalls, expect plenty of beautiful sights along the way.

In order to climb Mount Elgon, you’ll need to hire an official guide. One should also expect to spend about 5 days total when climbing to its highest peaks.

Mount Simien – Home to One of Africa’s Rarest Species
The Simien Mountains include an array of peaks above the 4,000 meters’ range including the well-known Ras Dejen, at 4,533 meters. Located in Ethiopia, the Simien climb is a great option if you’re interested in wildlife and visiting one of Africa’s rarest species – the Ethiopian wolf. Additionally, the gelada baboon and Ibex can be found in the range’s gorges and valleys.

The climb length varies greatly, and depending on the chosen route, expect to spend anywhere between 1 and 12 days on this mountain range.

The total climb will require 2 days, including one night of camping.

Mount Nyiragongo – Home to The World’s Largest Lava Lake
Mount Nyiragongo is yet another active volcano located in East Africa, with a total elevation of 3,470 meters. Certainly one for the more adventurous types, this volcanoes’ most recent eruption recently occurred in 2002, and it continues to be active.

This volcano is home to the world’s largest lava lake, and is another great reason why this climb is worth your time. A spectacular night view from the top directly into the caldera, no climb is complete without a night spent in the mountain’s tiny man-made cabins.

Expect two days to complete the hike up Mount Nyiragongo.

Mulanje Massif – Africa’s Largest Unbroken Climbing Wall
Also known by its name Mount Mulanje, Mulanje Massif reaches an elevation of 3,002 meters at its highest peak, Sapitwa. Scattered along the hike, many rental huts can be found which make this mountain also a popular destination for campers and hikers alike.

Most of Muljanje Massif’s peaks can be reached without the need for technical climbing. It is worth the note that the first day of the ascent is very steep, and can be quite demanding.

This is a 8 day Kilimanjaro hike starting at Machame gate, ascending through afromontane forest and then into the heath zone and on to the edge of the remnants of the Shira volcano. The route then circumnavigates the main peak…

Mt. Meru is located in the heart of Arusha National Park and it is 50 miles west of Mt. Kilimanjaro. Mount Meru is a massive volcano reaching 14,980 feet (4,565 meters). This trek serves as an ideal warm up for Mt. Kilimanjaro….

The Sirimom route is much more scenic than Naromoru route as it is on the drier side of Mount Kenya which offers some of the finest walking. Climb up through forest into a wide ridge approach to the summit area.