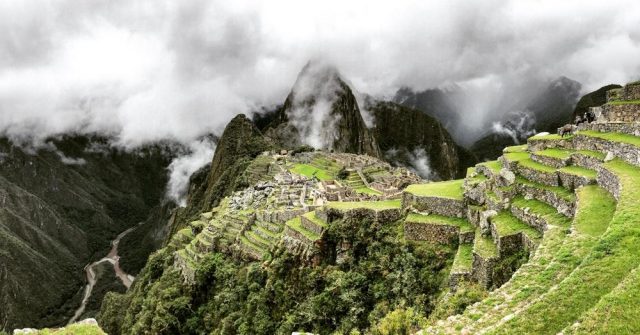 Peru is home to some of the world’s most mysterious and ancient civilizations, including the Inca Empire, who inhabited the rich resources of western South America during the early 15th century.

Located deep within the Peruvian Amazon and high-up between the peaks of the Andes, spectacular cities were built, showcasing the ingenuity and expertise that the Incas and other civilizations possessed at this time.

Many of Peru’s lost cities have been left to be re-discovered by tourists alike thanks to recent initiatives to promote tourism and develop infrastructure throughout the country.

Here are five of Peru’s lost cities you may have never heard about, but should consider visiting:

Choquequirao – Sister City of Machu Picchu
Located deep within the Peruvian Andes, far away from the hordes of tourists flocking to visit Machu Picchu, the lost city of Choquequirao measures in at nearly triple the size of its big sister Machu Picchu. These remote Inca ruins, meaning “Cradle of Gold”, are almost entirely deserted due to the two-day trek required to reach this desolate location.

The local government has invested a large sum of money in order to develop the local infrastructure to support tourism, including the construction of a cable car that will carry tourists directly to the city’s center. Considered as an attempt to attract tourists from around the world, the influx of foreign financial support will certainly help to further develop one of Peru’s poorest regions. Now is the time to visit this lost Inca gem before it’s silence is lost.

Paititi – The Lost City of Gold
Many archaeologists and explorers have lost their lives in search of “The Lost City of Gold”, better known as Paititi, remotely located deep within the depths of the Peruvian Amazon. A city left inhabited for only 100 years, its existence was soon brought to an end due to an outbreak of smallpox combined with the arrival of Spanish conquistadors, who pillaged the city while looking for gold and silver. Paititi was said to be one of the last refuges of the Inca people, in their short existence of only 300 years.

Located within the undiscovered corners of the Amazon, only the bravest will venture to take in all that this lost city has to offer. Recently re-discovered, the lost city of Paititi is now possible to explore with the help of professional tourism companies who provide guided tours of the former Incan city.

Kuelap – Home to The Warriors of the Cloud
One of Peru’s most remote cities, located over 10,000 feet up in the Andes mountains, the Kuelap fortress has recently been opened up to visitors by the construction of a nearly 3-mile-long cable car. Previously a difficult 5.5-mile uphill hike, the journey has now been transformed into a comfortable 20-minute ride from the nearest town, Nuevo Tingo.

Referred to as the second Machu Picchu, the fortified Kuelap was the home to “The Warriors of the Cloud” as early as 6th century AD, and remained in use until as late as 16th century AD. The cities strategic location and fortress-like characteristics lead historians to believe that Kuelap was built in order to allow the local population to defend themselves against their hostile neighbors.

Caral – The Pyramid City
Home to the Norte Chico civilization of Supe, the first known civilization of the Americas, Caral has a rich history dating back as far as 5,000 years. Known as the “Pyramid City”, Caral includes a half dozen pyramid structures, where the at the time rulers had lived in dwellings atop of these structures. Caral was built 4,000 years before Machu Picchu, but remains a destination that receives much less tourists, despite its attractive history and overall good-standing condition.

Recently opened to the public since the last few years, Caral is roughly 125 miles from Peruvian capital of Lima. It’s possible to reach and explore the city of Caral without a guided tour, but can be prove to be very time-consuming as there’s a general lack of tourist infrastructure available.

The city center includes a series of 10 different walled citadels, each which include their own unique decorative wall patterns. Each citadel contained burial mounds, as well as graves of young women who were sacrificed and adorning pieces of jewelry. Chan Chan eventually would fall to the Incas, and later lose all of its gold and silver to the Spanish conquistadors.

Visiting with an organized tour is highly recommended, as signage is very limited and much of the site is normally covered to prevent further erosion from occurring.

Cusco has many attractions, most notably the Inca culture, visit the beautiful colonial temples built on Inca foundations. This tour takes the famous train ride from Ollantaytambo to the frontier town of Aguas Calientes for an exploration of Machu Picchu…

Our favorite route. It combines the magic of Cusco, fun activities for the little ones like making their own bracelets in Chinchero, and a wonderful highlight: Machu Picchu…