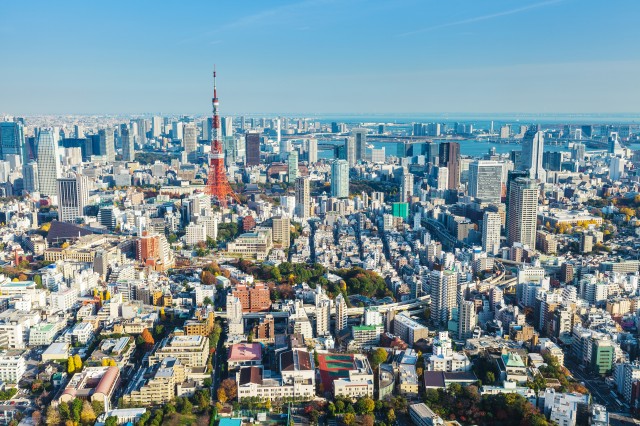 Tokyo, the capital of Japan, is home to 12 million people and the Greater Tokyo area has a population of 35 million people making it the most populated urban area in the world. Depending on how you count it the Pearl River Delta might be as high as 40 million if you include Shenzhen. No matter which is the biggest Tokyo is a huge, wealthy and fascinating metropolis which brings high-tech visions of the future side by side with glimpses of old Japan.

The Tokyo Tower is a great place to start and get a view of the entire city. Although some might consider it “Tokyo’s largest tourist trap.” Nonetheless, it’s an icon of Tokyo and an impressive 9 meters taller than the Eifel Tower. Entry to the Main Observatory (150m) is ¥820, while ascending to the Special Observatory (250m) is an extra ¥600.

If you need a fix for some of the best sushi on the planet head to the Tsukiji Fish Market. Its best to go for breakfast and see the actual market before grabbing a bite to eat. The famous market is worth a visit for 1600 stalls of bizarre sea creatures, including large blue fin tuna, live shell fish, deep sea crabs, eels and salmon. Tsukiji’s restaurants can be found in alleys of Building 6, reached by walking in from the main entrance and turning right at the central square. The two most well known places are Daiwa Sushi and Sushidai.

To see a quieter side of Tokyo take a stroll through the Imperial Palace’s East Gardens (open to the public daily at 09:00, except Fridays and Mondays). Tokyo Imperial Palace is the main residence of the emperor of Japan and located adjacent to Tokyo Station.

If your looking for an evening out a great stop is the Shinjuku Station a huge business, commercial, and entertainment center located atop the world’s busiest railway station complex. To the north lies Takadanobaba, where students from nearby Waseda University cross paths. The east side of Shinjuku is devoted to shopping and nightlife, including Tokyo’s largest red-light district Kabukicho.

Shibuya is famous for the worlds busiest crosswalk and Starbucks coffee. Center Gai is the narrow street leading away from the station and is known as the center of many fashion trends. Its jam-packed with clothing stores, music stores, and video game arcades. This street is a great place to stroll and feel the Shibuya vibe. It’s within walking distance from two other large shopping districts which include Omotesando and Harajuku.

Tokyo is a huge city and several days can’t do it justice. We just hit a few of the many highlights here and hope you guys share a few more with us.