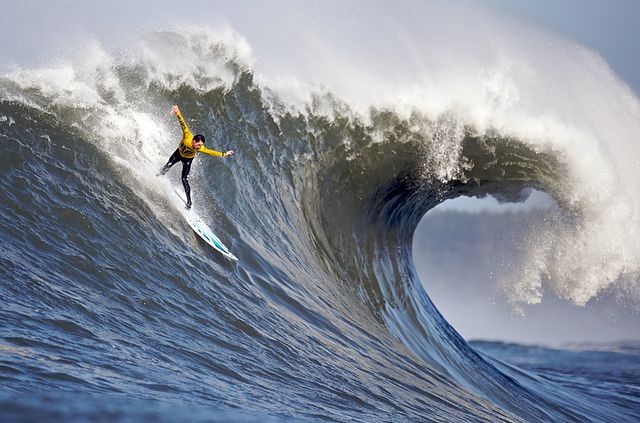 Beautiful beaches and amazing waves, here is a look at the worlds 25 best surfing spots. These beaches are every surfers dream and even if you don’t surf a visit to one of the beaches will take your breath away. If you’re looking for big waves some of the biggest are found at Mavericks in California where waves regularly top 20 feet (6+m). Teahupo’o in French Polynesia serves up a devastatingly powerful wave that only true experts can surf. The world’s largest waves ever surfed are in Nazare (Portugal) and some claims put them in excess of 100 feet. Now here is our list of the 25 best surfing spots and it’s not all about big waves.

The Banzai Pipeline, or simply “Pipeline” or “Pipe,” is a surf reef break located in Hawaii, off Ehukai Beach Park in Pupukea on O’ahu’s North Shore. A reef break is an area in the ocean where waves start to break once they reach the shallows of a reef. Pipeline is notorious for huge waves which break in shallow water just above a sharp and cavernous reef, forming large, hollow, thick curls of water that surfers can tube ride.

Jeffreys Bay is a town located in the Eastern Cape province of South Africa. It is one of the five most famous surfing destinations in the world and hosts the annual Billabong Pro ASP World Tour surfing event at Super Tubes during July.

A popular tourist destination in the summer, Tofino’s population swells to many times its winter size. It attracts surfers, nature lovers, campers, whale watchers, fishermen, or anyone just looking to be close to nature. In the winter it is not as bustling, although many people visit Tofino and the west coast to watch storms on the water.

Uluwatu is a place on the south-western tip of the Bukit Peninsula of Bali, Indonesia. It is home to the Pura Luhur Uluwatu Temple and is the number four surf destination in the World for surfers of all abilities. Uluwatu was “discovered” as a surfing destination in 1972, due to the making of Morning of the Earth, a 1971 classic surf film by Alby Falzon and David Elfick.

Snapper Rocks is a small rocky outcrop on the northern side of Point Danger at the southern end of Rainbow Bay on the Gold Coast. It is a famous surf break and today the start of the large sand bank known to surfers as the Superbank.

Watergate Bay is a bay located two miles north of Newquay on the B3276 Newquay to Padstow road near The Village of Tregurrian in Cornwall, United Kingdom. It faces the Atlantic Ocean. The two mile long, sandy beach and exposed north westerly location is a popular location for water sports, kite flying, and sand art.

Mavericks is a surfing location in Northern California about 2 miles from shore outside Pillar Point Harbor, just north of the town of Half Moon Bay at the village of Princeton-by-the-Sea. After a strong winter storm in the northern Pacific Ocean, waves can routinely crest at over 25 feet and top out at over 80 feet. The break is caused by an unusually shaped underwater rock formation.

Hossegor has long been one of the premier surfing locations in Europe, with a series of world-class beach breaks such as Gravière and La Nord, and with nearby beach breaks in Capbreton and Seignosse such as La Piste and Bourdaines. It supports a thriving nightlife through the summer, centered at La Plage Centrale. It holds the Quiksilver Pro France contest every year in September.

One of the best known surfing waves on Siargao and the Philippines, with a worldwide reputation for thick, hollow tubes is “Cloud 9”. This right-breaking reef wave is the site of the annual Siargao Cup, a domestic and international surfing competition sponsored by the provincial government of Surigao del Norte.

Lima is the capital and the largest city of Peru. It is located in the valleys of the Chillón, Rímac and Lurín rivers, in the central coastal part of the country, overlooking the Pacific Ocean. Beaches are visited during the summer months, located along the Pan-American Highway, to the south of the city in districts such as Lurín, Punta Hermosa, Santa María del Mar (Peru), San Bartolo and Asia.

Montañita is a small coastal town located in the Parrish of Manglaralto in the province of Santa Elena about 180 kilometers northwest of Guayaquil. Surfing in Montañita offers strong, consistent waves and good tubes make it a great place for accomplished surfers and challenging for newer surfers. Montañita is an increasingly popular destination on the international surfing circuit.

Rincón is well known as a surfing destination.It is home to many of the surfing beaches in Puerto Rico, including Domes, Marias, Tres Palmas, Sandy Beach, Pools Beach, and Rincon Town Beach Plaza. It is also home to Caribbean beaches including Córcega Beach. Rincón is on the northwestern part of Puerto Rico.

Teahupo’o is a village on the south-west coast of the island of Tahiti, French Polynesia, southern Pacific Ocean. It is known for the surf break and heavy, glassy waves offshore, often reaching 2 to 3 m, and sometimes up to 7 meters. It is the site of the annual Billabong Pro Tahiti surf competition, part of the World Championship Tour (WCT) of the Association of Surfing Professionals World Tour surfing circuit and used to be one stop in the World Tour of the International Bodyboarding Association.

Tamarindo is a town and distrito located on the Nicoya Peninsula on the Northern Pacific coast of Costa Rica in the Province of Guanacaste. Playa Tamarindo is a long beach, with excellent waves near the mouth of the estuary. Currents can be strong, especially on a falling tide. Tamarindo has two main breaks for advanced surfers: Pico Pequeño a rocky point in front of the Hotel Tamarindo Diriá and the excellent river mouth break across from Cabinas Tsunami called El Estero.

Honolua Bay, Mokule’ia Bay and Lipoa Point are part of an area known as the ahupua’a of Honolua, located just north of Kapalua, West Maui in Maui County, Hawai’i, United States. The coastline at Honolua and Mokule’ia is rugged and is accessed by trail from a parking lot adjacent to the Honoapiilani Highway above. Honolua Bay consists of a rocky shoreline with small beach, coral reefs in a marine preserve and World-renowned surf break.

Bundoran is a town in County Donegal, Ireland. The town is located on the N15 road near Ballyshannon, and is the most southerly town in Donegal. The town is a popular seaside resort, and tourism has been at the heart of the local economy since 1777. Bundoran is a World-renowned surfing area and was listed by National Geographic magazine in 2012 as one of the World’s Top 20 Surf Towns.

Black’s Beach is a secluded section of beach beneath the bluffs of Torrey Pines on the Pacific Ocean in La Jolla, San Diego, California, United States. It is officially part of Torrey Pines State Beach. The northern portion of Black’s Beach is owned and managed by the California Department of Parks and Recreation, while the southern portion of the beach, officially known as Torrey Pines City Beach, is jointly owned by the city of San Diego and the state park, but is managed by the city of San Diego.

Carrapateira is a village on the western coast of the Algarve, Portugal. Situated in a hilly, dry and barren area, with only a small river and a few wells, Carrapeteira never supported a large population. The nearby beaches are a popular surfing destination.

Fuerteventura is one of the Canary Islands, in the Atlantic Ocean off the coast of Africa, politically part of Spain. The sea and climate conditions make the island the perfect place for a huge variety of watersports. Many types of surfing are popular on the island, including traditional surfing, windsurfing and most recently kitesurfing. The island has many schools and courses dedicated to teaching these sports.

Puerto Escondido is a small port and tourist center in the municipality of San Pedro Mixtepec Distrito 22 in the Mexican state of Oaxaca. Puerto Escondido is one of the most important tourist attractions on the Oaxacan coast. It caters to a more downscale and eclectic clientele than neighboring Huatulco, mostly surfers, backpackers and Mexican families. The main attractions are the beaches: Zicatela Beach hosts major surfing competitions, while other beaches have gentle waves.

Margaret River’s coast to the west of the town is a renowned surfing location, with World wide notoriety for its surf breaks. Colloquially, the area is referred to as Margs. The Margaret River area has acquired a range of synonyms for the collection of surf breaks nearby. Usually significant surfing competitions concentrate their locale to Margarets Main Break (aka Surfers Point) which breaks in the vicinity of Prevelly at the mouth of Margaret River.

Sun and Moon Bay, also known as Riyue Bay, is located approximately 25 km south of Wanning, Hainan, China. It is around 45 km long, and as been the site of numerous surfing events.

Raglan is a small beachside town located 48 km west of Hamilton, New Zealand on State Highway 23. Raglan is best known for its surf. Eight kilometres from the Raglan township is a series of surf breaks including Indicators, Whale Bay, Manu Bay, Vortex Bay. Manu Bay was featured in the 1966 movie The Endless Summer and in the 2010 movie Last Paradise.

Tavarua is a heart shaped island resort in Fiji. The island is close to the main Fijian island, Viti Levu, and is surrounded by a coral reef. Activities on Tavarua include surfing, sport fishing, scuba diving, snorkeling and kayaking. There are seven main surfing breaks that are all available to guests staying at the all-inclusive island resort: Cloudbreak, Restaurants, Tavarua Rights, Swimming Pools, Namotu Left, Wilkes Pass, and Desperations which are all World-class waves.