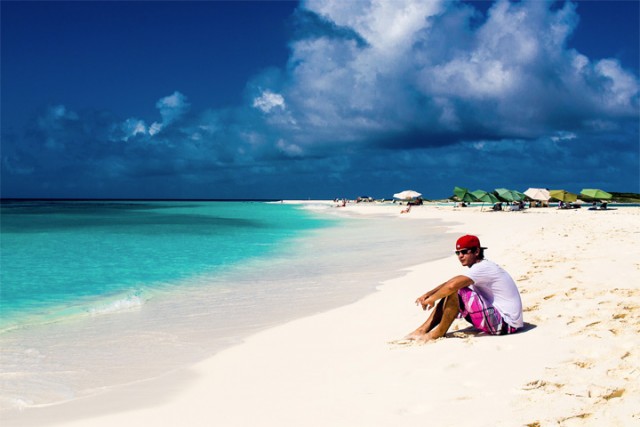 Southeast Asia hosts some of the worlds best beaches. If your looking for an all night party hot spots head to Kuta Beach in Bali, Patong in Thailand or Goa in India.

If its just white sands and palm trees consider the beautiful Boracay in the Philippines or Rantau Abang in Malaysia. If you have a little more time to get off the beaten track you can head to the beaches of Coron in the Philippines or those of the Andaman Island in India. If I had to rate things I would put the Philippines, Sri Lanka and Indonesia at the top for beautiful beaches. What do you think ? Join the discussion

Rantau Abang beaches are well known for its turtles. The state of Terengganu’s penchant to associate itself with turtles started here in Rantau Abang. The water is crystal clear and enticing enough for a swim. One who climbs the giant boulder rock can admire its geological formation of different sedimentary layers throughout millions of years. The rock also provides a bird’s eye view of the beach.

Once a sleepy village with a quiet, beautiful sweep of beach, Kuta today has become a popular beach destination in its own right, alive with tourists from all over the World, swimming, surfing or sunbathing by the beach. Others, casually dressed in shorts, T-shirts and flip-flops stroll along its main road, shopping around or enjoying meals at its many open air restaurants. When in Kuta you know that you are in a holiday town, and people here are in a holiday mood.

Patong Beach refers to the beach and town on Phuket’s west coast. It is the main tourist resort in Phuket. It contains an important center of Phuket’s nightlife and is the center of inexpensive shopping on the island. The beach became popular with Western tourists, especially Europeans, in the late 1980s. Numerous large hotels and chain hotels are located there and the area has expanded into a large tourist mecca.

Located at the end of Jalan Tunku Abdul Rahman and about 6 kilometres from KK City, this place is closest to the hearts of the locals, and just one visit to the beach will tell you why. Taking its name from the casuarinas or aru trees that fringe the fine sands, this is where one might get a ringside seat to the greatest sunset on earth every evening when the crimson sun dips slowly into the horizon, leaving the vast skies a brilliant red.

Palawan Beach lies in the centre of the southern coast of Sentosa. There is a suspension bridge that leads to a small islet off the coast which is said to be the southernmost point of continental Asia, or Asia’s closest point to the Equator.

Otres Beach, is around 4.6 km long and beyond the small “Queen hill” headland at the southern end of Ochheuteal Beach. Its long white sand strip, also completely lined with Casuarina and Tamarisk trees, is far less developed and commercialized than Ochheuteal Beach and has developed into a preferred lodging place for Western visitors.

Treasure Island Beach south of Lamherkay/Hawaii Beach is less than 50 m long and its entire length is fringed with concrete steps and wooden pavilions of a big Cambodian seafood restaurant.

Independence Beach is around 1.3 km long and located north-west of Sokha Beach. The beach is named after the Independence Hotel, another example of New Khmer Architecture, towering on top of a rock at the beaches northern end.

Blue Point Beach (pantai Suluban), jalan pantai suluban,ungasan. This beach is less prestigious than Kuta, Sanur or Nusa Dua. But if you have visited this beach, you’ll surely be fascinated with the exoticism of this offer. My suggestion is to try a visit to the beach and you will not waste your time.

The Alona Beach is located on the Panglao island, Philippines. It is situated around 20 kilometres (12 mi) from Tagbilaran.It is one of the most famous tourist spots in the Bohol province, because of its white sand and the rocky cliffs surrounding it.

The Kalapathar Beach is situated on one corner of Havelock Island.You have to travel along the Road From Beach no#3 and Beach no#5 The beach gets its name from the surrounding village called Kalapathar Village and the black rocks (Kalapathar Rocks) that adorn the coastline here.

Radhanagar Beach is the most beautiful on the island and was rated as the best in Asia by Time in 2004. Gorgeous, silky white sand backed by a forest that provides welcome shade looks out over turquoise water, some stretches with a sandy bottom good for swimming and some with excellent coral reefs that are great for snorkeling – a great combination indeed.

Cua Dai Beach is located in the area of Cam An Ward, about 4km to the north-east of Hoi An Town, Quang Nam Province. Cua Dai Beach is over 3km in length and up to 300m in width. The beach boasts fine white sand, clear and blue water, moderate slopes and small waves, which make it ideal for recreational activities like swimming and other sea sports.

Dreamland Beach (now known as New Kuta Beach) is a beach located on the Bukit peninsula, on the island of Bali, Indonesia. The beach provides basic accommodation and cafes for surfers and day-trippers. It is also renowned for its dangerous shorebreak. Dreamland Beach is the site of the failed Pecatu Graha development..

The White Beach in Boracay, is on the western side of the island and is sheltered from the wind. During the Amihan season, the water off White Beach is often glassy-smooth.

Lhoknga Beach, is in Lhoknga subdistrict. The beach and the neighboring town of Lhoknga was completely wiped out by the 2004 Tsunami. The beach has been restored and tourists are returning to the beach.

The main attraction of Pekan Muara is Muara beach (Pantai Muara in Malay) along South China Sea. The beach is about a mile long and consists of clear white sand. Amenities here include a well-equipped picnic area, a children’s playground, changing and toilet facilities, as well as weekend food and drink stalls.

Ngapali Beach is a beach located 7 kilometres (4 mi) from the town of Thandwe (Sandoway), in Rakhine State, Myanmar. It is the most famous beach in Myanmar and is a popular tourist destination. Ngpali Beach is the most beautiful beach of Southeast Asia.