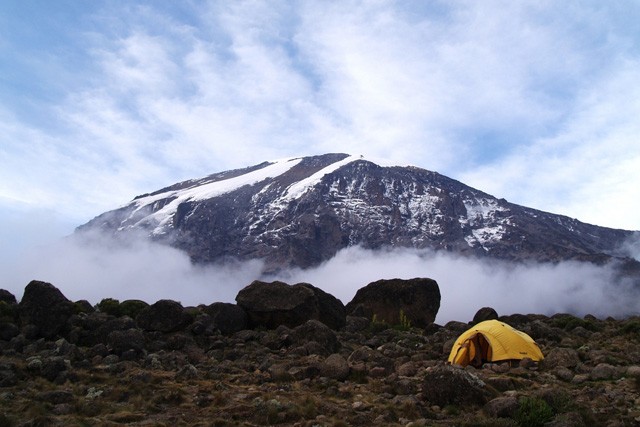 Breathtaking beaches, amazing wildlife and snow capped peaks it seems Africa has something for everyone. Here is a list of the 20 most stunning destinations in Africa to consider for your next adventure.

Table Mountain is a flat-topped mountain forming a prominent landmark overlooking the city of Cape Town in South Africa, and is featured in the flag of Cape Town and other local government insignia. It is a significant tourist attraction, with many visitors using the cableway or hiking to the top. The mountain forms part of the Table Mountain National Park.

Volcanoes National Park lies in northwestern Rwanda and borders Virunga National Park in the Democratic Republic of Congo and Mgahinga Gorilla National Park in Uganda. The national park is known as a haven for the mountain gorilla. It is home to five of the eight volcanoes of the Virunga Mountains (Karisimbi, Bisoke, Muhabura, Gahinga and Sabyinyo), which are covered in rainforest and bamboo.

Zanzibar is a semi-autonomous part of Tanzania in East Africa. It is composed of the Zanzibar Archipelago in the Indian Ocean, 25-50 kilometres off the coast of the mainland, and consists of many small islands and two large ones: Unguja and Pemba. The capital is Zanzibar City, located on the island of Unguja. Its historic centre is Stone Town, which is a World Heritage Site.

Victoria Falls, or Mosi-oa-Tunya, is a waterfall in southern Africa on the Zambezi River at the border of Zambia and Zimbabwe. While it is neither the highest nor the widest waterfall in the world, it is classified as the largest, based on its width of 1,708 metres and height of 108 metres, resulting in the world’s largest sheet of falling water. Victoria Falls is roughly twice the height of North America’s Niagara Falls and well over twice the width of its Horseshoe Falls.

The Ngorongoro Conservation Area (NCA) is a conservation area and a UNESCO World Heritage Site situated 180 km (110 mi) west of Arusha in the Crater Highlands area of Tanzania. The main feature of the NCA is the Ngorongoro Crater, a large, unbroken, unflooded volcanic caldera. The crater, which formed when a giant volcano exploded and collapsed on itself some two to three million years ago, is 610 m.

The Serengeti National Park is a Tanzanian national park in the Serengeti ecosystem in the Mara and Simiyu regions. It is famous for its annual migration of over 1.5 million white bearded wildebeest and 250,000 zebra and for its numerous Nile crocodile. As well as the migration of ungulates, the park is well known for its healthy stock of other resident wildlife, particularly the “big five”.

Masai Mara National Reserve is one of Kenya’s most popular and widely visited National Parks in the country. Incredibly rich in wildlife, the Masai Mara reserve is famous for its annual migration of the wildebeest which is called the “Great Migration”. This reserve was created in 1961 and is naturally a part of the Serengeti plains in Tanzania.

Sossusvlei is a salt and clay pan surrounded by high red dunes, located in the southern part of the Namib Desert, in the Namib-Naukluft National Park of Namibia. The name “Sossusvlei” is often used in an extended meaning to refer to the surrounding area, which is one of the major visitor attractions of Namibia. Access to the Sossusvlei area of the Namib-Naukluft National Park is from the Sesriem gate, which is located in the surroundings of the eponymous canyon.

The Great Pyramid of Giza is the oldest and largest of the three pyramids in the Giza Necropolis bordering what is now El Giza, Egypt. It is the oldest of the Seven Wonders of the Ancient World, and the only one to remain largely intact. Egyptologists believe that the pyramid was built as a tomb for fourth dynasty Egyptian Pharaoh Khufu over an approximately 20 year period concluding around 2560 BC.

Nyika National Park is Malawi’s largest national park, with an area of 3200 km sq. The park covers practically the whole of the Nyika Plateau in northern Malawi, about 480 km north of Lilongwe and 60 km north of Rumphi by road. The name, Nyika, means “where the water comes from” as the plateau’s elevation makes it wetter than surrounding areas. The top is frequently in cloud in the rainy season which brings over 200 types of orchid into flower.

The Spitzkoppe is a group of bald granite peaks or bornhardts located between Usakos and Swakopmund in the Namib Desert of Namibia. The granite is more than 700 million years old and the highest outcrop rises about 1,784 metres (5,853 ft) above sea level. The peaks stand out dramatically from the flat surrounding plains. The highest peak is about 700 m above the floor of the desert below. A minor peak – the Little Spitzkoppe – lies nearby at an elevation of 1,584 m.

The Great Sphinx of Giza, commonly referred to as the Sphinx, is a limestone statue of a reclining or couchant sphinx (a mythical creature with a lion’s body and a human head) that stands on the Giza Plateau on the West Bank of the Nile in Giza, Egypt. The face of the Sphinx is generally believed to represent the face of the Pharaoh Khafra.

The Mulanje Massif, also known as Mount Mulanje, is a large monadnock in southern Malawi only 65 km east of Blantyre,:2 rising sharply from the surrounding plains of Chiradzulu, and the tea-growing Mulanje district. It measures approximately 13×16 miles and has a maximum elevation of 3,002 m at its highest point, Sapitwa Peak. Much of the Massif consists of rolling grassland at elevations of 1800–2200 m, intersected by deep forested ravines.

Mount Nyiragongo is a stratovolcano in the Virunga Mountains associated with the Albertine Rift. It is located inside Virunga National Park, in the Democratic Republic of the Congo, about 20 km north of the town of Goma and Lake Kivu and just west of the border with Rwanda. The main crater is about two km wide and usually contains a lava lake.

Lake Nakuru is a shallow strongly alkaline lake set in a picturesque landscape of surrounding woodland and grassland. The landscape includes areas of marsh and grasslands alternating with rocky cliffs and outcrops, stretches of acacia woodland and rocky hillsides covered with a Euphorbia forest. The lake’s abundance of algae attracts the vast quantity of flamingos that famously line the shore. Other birds also flourish in the area, as do warthogs, baboons and other large mammals.

The Lower Zambezi National Park lies on the north bank of the Zambezi River in south Eastern Zambia. Until 1983 when the area was declared a national park the area was the private game reserve of Zambia’s president. This has resulted in the park being protected from the ravages of mass tourism and remains one of the few pristine wilderness areas left in Africa.

Nxai Pan National Park is a national park in north-eastern Botswana, consisting of Nxai Pan, which is one of the Makgadikgadi Pan salt flats. This park is considered for inclusion in the 5 Nation Kavango – Zambezi Transfrontier Conservation Area.

The Fish River Canyon is located in the south of Namibia. It is the second largest canyon in the World and the largest in Africa, as well as the second most visited tourist attraction in Namibia. It features a gigantic ravine, in total about 100 miles (160 km) long, up to 27 km wide and in places almost 550 metres deep.

Mount Kilimanjaro with its three volcanic cones, “Kibo”, “Mawenzi”, and “Shira”, is a dormant volcanic mountain in Tanzania. It is the highest mountain in Africa, and rises approximately 4,877 metres (16,001 ft) from its base to 5,895 metres (19,341 ft) above sea level. The first recorded ascent to the summit of the mountain was by Hans Meyer and Ludwig Purtscheller in 1889.

Lake Malawi (also known as Lake Nyasa in most countries, or Lake Nyassa, Lake Niassa, or Lago Niassa in Mozambique), is an African Great Lake and the southernmost lake in the East African Rift system. This lake, the third largest in Africa and the eighth largest lake in the world, is located between Malawi, Mozambique, and Tanzania.

The World’s 20 Most Amazing Landscapes
The World’s 50 Most Romantic Vacation Spots
The World’s Greatest Drives
12 War Memorial Across the World
Categories: Travel