The World’s 20 Most Amazing Landscapes 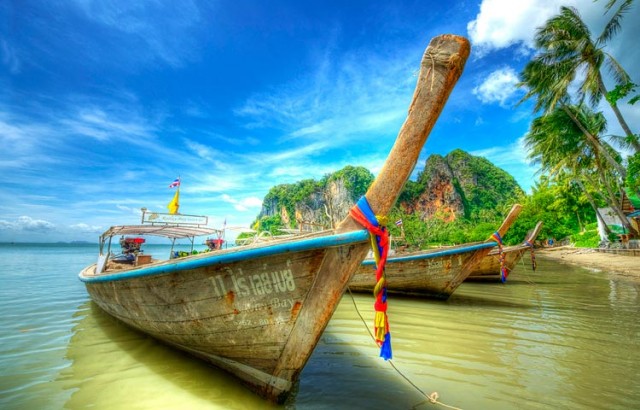 Hạ Long Bay is a UNESCO World Heritage Site, and a popular travel destination, in Quảng Ninh Province, Vietnam. The bay features thousands of limestone karsts and isles in various sizes and shapes.Hạ Long Bay is a center of a larger zone which includes Bái Tử Long bay to the northeast, and Cát Bà islands to the southwest. These larger zones share similar geological, geographical, geomorphological, climate, and cultural characters.

Chimney Rock is a village in Rutherford County, North Carolina, United States. The village takes its name from a large granite outcropping located on a summit above the village itself in Chimney Rock State Park.According to the United States Census Bureau, the village has a total area of 2.8 square miles (7.3 km2), all of it land. The town shares a border with the town of Lake Lure.

Zhangjiajie is a prefecture-level city in the northwestern part of Hunan province, People’s Republic of China. It comprises the district of Yongding and counties of Cili and Sangzhi. Within it is located Wulingyuan Scenic Area which was designated a UNESCO World Heritage Site in 1992 as well as an AAAAA scenic area by the China National Tourism Administration.

Hvítserkur is a 15 m high basalt stack along the eastern shore of the Vatnsnes peninsula, in northwest Iceland. The rock has two holes at the base, which give it the appearance of a dragon who is drinking. The base of the stack has been reinforced with concrete to protect its foundations from the sea. Several species of birds, such as gulls and fulmars, live on at Hvítserkur and its name (“white shirt” in Icelandic) comes from the color of the guano deposited on its rocks.

Matheran is a Hill Station and a municipal council in the Raigad district in the Indian state of Maharashtra. It is a hill station in Karjat Tahsil and is also the smallest hill station in India. It is located on the Western Ghats range at an elevation of around 800 m (2,625 feet) above sea level.

Iguazu Falls, are waterfalls of the Iguazu River on the border of the Argentine province of Misiones and the Brazilian state of Paraná. The falls divide the river into the upper and lower Iguazu. The Iguazu River rises near the city of Curitiba. For most of its course, the river flows through Brazil, however, most of the falls are on the Argentine side. Below its confluence with the San Antonio River, the Iguazu River forms the boundary between Argentina and Brazil.

Covering an area of 190 hectares, the park features blooming flowers around the year. The park has become known for its baby blue-eyes flowers, with the blooming of 4.5 million of the translucent-petaled blue flowers in the spring drawing tourists. In addition to the annual “Nemophila Harmony”, the park features a million daffodils, 170 varieties of tulips, and many other flowers. The park includes cycling trails and a small amusement park with a Ferris wheel.

Hallstatt is a village in the Salzkammergut, a region in Austria. It is located near the Hallstätter See (a lake). At the 2001 census, it had 946 inhabitants. Alexander Scheutz has been mayor of Hallstatt since 2009. Hallstatt is known for its production of salt, dating back to prehistoric times, and gave its name to the Hallstatt culture, a culture often linked to Celtic, Proto-Celtic, and pre-Illyrian peoples in Early Iron Age Europe, c.800–450 BC. Some of the earliest archaeological evidence for the Celts was found in Hallstatt.

Bagan is an ancient city located in the Mandalay Region of Burma (Myanmar). From the 9th to 13th centuries, the city was the capital of the Kingdom of Pagan, the first kingdom to unify the regions that would later constitute modern Myanmar.

Bora Bora is an island in the Leeward group of the Society Islands of French Polynesia, an overseas collectivity of France in the Pacific Ocean. The island, located about 230 kilometres (143 miles) northwest of Papeete, is surrounded by a lagoon and a barrier reef. In the Centre of the island are the remnants of an extinct volcano rising to two peaks, Mount Pahia and Mount Otemanu, the highest point at 727 metres (2,385 feet).

Salar de Uyuni (or Salar de Tunupa) is the World’s largest salt flat at 10,582 square kilometers (4,086 sq mi). It is located in the Daniel Campos Province in Potosí in southwest Bolivia, near the crest of the Andes and is at an elevation of 3,656 meters (11,995 ft) above mean sea level.

Sapa has many natural sites such as Ham Rong Mountain, Silver Waterfall, Rattan Bridge, Bamboo Forest and Ta Phin Cave.Sapa is also the starting point for many climbers and scientists who want to reach the top of Fansipan Mountain, the highest mountain in Vietnam at 3,143m. Hoang Lien Mountain Range is also called the Alps of the North Sea area since Fansipan Mountain is not only the highest peak in Vietnam, but also in the Indochina Peninsula. The pyramid-shaped mountain is covered with clouds all year round and temperatures often drop below zero,

Porto Katsiki on the Ionian Sea island of Lefkada is a beach. The name is said to be because formerly only goats could reach this area. The beach is at the bottom of a concave pale cliff. It is 35 km from Lefkada town, near Athani village. Porto Katsiki has parking lots and canteens. There is no lodging, and camping is prohibited. There is a stairwell down to the beach from the cliff-top parking.

Preikestolen  is a massive cliff 604 metres (1982 feet) above Lysefjorden, opposite the Kjerag plateau, in Forsand, Ryfylke, Norway. The top of the cliff is approximately 25 by 25 metres (82 by 82 feet) square, almost flat, and is a famous tourist attraction in Norway.

Te Whanganui-A-Hei (Cathedral Cove) Marine Reserve is on the Coromandel Peninsula in New Zealand covering an area of 840 hectares (2,100 acres). Cathedral Cove is named after the cave located there, linking Mare’s Leg Cove to Cathedral Cove. Gemstone Bay and Stingray Bay are also located within the reserve.

The Haʻikū Stairs, also known as the Stairway to Heaven or Haʻikū Ladder, is a steep hiking trail on the island of Oʻahu.The trail began as a wooden ladder spiked to the cliff on the south side of the Haʻikū Valley. It was installed in 1942 to enable antenna cables to be strung from one side of the cliffs above Haʻikū Valley to the other.

Pangong Tso Tibetan for “long, narrow, enchanted lake”, also referred to as Pangong Lake, is an endorheic lake in the Himalayas situated at a height of about 4,350 m (14,270 ft). It is 134 km (83 mi) long and extends from India to Tibet. During winter the lake freezes completely, despite being saline water. It is not part of Indus river basin area and geographically a separate land locked river basin.

The Tunnel of Love is an amusement railway located near Klevan, Ukraine. It is a railway surrounded by green arches and is three kilometers in length. It is known for being a favorite place for couples to take walks.

The Zlatni Rat, often referred to as the Golden Cape or Golden Horn (translated from the local Chakavian dialect), is a spit of land located about 2 kilometres (1 mile) west from the harbour town of Bol on the southern coast of the Croatian island of Brač, in the region of Dalmatia. It extends into the Hvar Channel, a body of water in the Adriatic Sea between the islands of Brač and Hvar.

12 War Memorial Across the World
The 5 Greatest Adventures of All Time
5 Reasons It Might Be a Good Time to Visit Egypt
20 Amazing Places to Scuba Dive
Categories: Travel