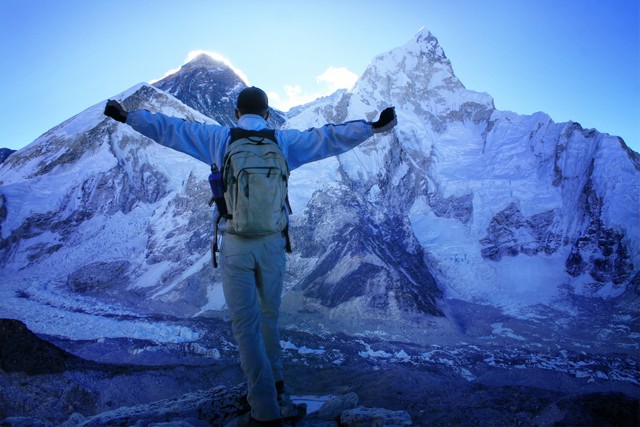 Here is a look at some of the world’s tallest and most impressive mountain peaks from Antarctica to Africa. Puncak Jaya in Indonesia reaches a height of 4,884 metres (16,024 ft) above sea level and is the only mountain in the tropical Pacific with permanent ice fields at the summit. Vinson Massif in Antarctica reaches 4892m and is in one the most inhospitable environments in the world. Jengish Chokusu lies in the remote and seldom visited Tian Shan Mountains of central Asia 7,439 metres (24,406 ft). Read on to see the rest of the mountains that made our list of amazing peaks.

Aconcagua is the highest mountain in the Americas at 6,959 m (22,841 ft). It is located in the Andes mountain range, in the Argentine province of Mendoza and it lies 112 kilometres (70 mi) west by north of its capital, the city of Mendoza. The summit is also located about 5 kilometres from San Juan Province and 15 kilometres from the international border with Chile. Aconcagua is the highest peak in both the Western and Southern Hemispheres. It is one of the Seven Summits.

Mount McKinley or Denali (Koyukon Athabaskan for “The High One”, Dghelaayce’e in Ahtna) is the highest mountain peak in North America, with a summit elevation of 20,237 feet (6,168 m) above sea level. At some 18,000 feet (5,500 m), the base to peak rise is considered the largest of any mountain situated entirely above sea level. Measured by topographic prominence, it is the third most prominent peak after Mount Everest and Aconcagua.

Mount Kilimanjaro with its three volcanic cones, “Kibo”, “Mawenzi”, and “Shira”, is a dormant volcanic mountain in Tanzania. It is the highest mountain in Africa, and rises approximately 4,877 metres (16,001 ft) from its base to 5,895 metres (19,341 ft) above sea level. The first recorded ascent to the summit of the mountain was by Hans Meyer and Ludwig Purtscheller in 1889. The mountain is part of the Kilimanjaro National Park and is a major climbing destination.

Pico Cristóbal Colón is the highest mountain in Colombia, with an estimated height of 5,700 metres (18,700 ft). It is also the fifth most prominent in the World. The nearest peak that is higher is Cayambe, some 1,288 kilometres (800 mi) away. There is a permanent snowcap on this peak and on the nearby mountains. It is part of the Sierra Nevada de Santa Marta range, along with Pico Simón Bolívar.

Mount Logan is the highest mountain in Canada and the second-highest peak in North America, after Mount McKinley (Denali). Mount Logan is located within Kluane National Park and Reserve in southwestern Yukon and is the source of the Hubbard and Logan Glaciers. Logan is believed to have the largest base circumference of any non-volcanic mountain on Earth, with the massif containing eleven peaks over 5,000 metres (16,400 ft).

The Pico de Orizaba, or Citlaltépetl, is a stratovolcano, the highest mountain in Mexico and the third highest in North America. It rises 5,636 metres above sea level in the eastern end of the Trans-Mexican Volcanic Belt, on the border between the states of Veracruz and Puebla. The volcano is currently dormant but not extinct with the last eruption taking place during the 19th century. It is the second most prominent volcanic peak in the World after Africa’s Mount Kilimanjaro.

Vinson Massif is the highest mountain of Antarctica, lying in the Sentinel Range of the Ellsworth Mountains, which stand above the Ronne Ice Shelf near the base of the Antarctic Peninsula. The massif is located about 1,200 kilometres (750 mi) from the South Pole and is about 21 km (13 mi) long and 13 km (8.1 mi) wide. At 4,892 metres (16,050 ft) the highest point is Mount Vinson.

Mount Elbrus is a dormant volcano located in the western Caucasus mountain range, in Kabardino-Balkaria and Karachay-Cherkessia, Russia, near the border of Georgia. Mt. Elbrus’s peak is the highest in the Caucasus, in Russia. While there are differing authorities on how the Caucasus are distributed between Europe and Asia, many sources agree that Elbrus is also the highest mountain in all of Europe, or the highest in western Asia

Mont Blanc or Monte Bianco both meaning “White Mountain”, is the highest mountain in the Alps and the European Union. It rises 4,810 m (15,781 ft) above sea level and is ranked 11th in the world in topographic prominence. It is also sometimes known as La Dame blanche (French for “the White Lady”) or Il Bianco (Italian for “the White One”). The mountain lies in a range called the Graian Alps, between the regions of Aosta Valley, Italy, and Haute-Savoie, France.

Mount Damāvand, is a potentially active volcano or Stratovolcano and the highest peak in Iran, has a special place in Persian mythology and folklore. It is located in the middle Alborz Range, adjacent to Varārū, Sesang, Gol-e Zard and Mīānrūd and is the highest volcano in all of Asia. It is a potentially active volcano, since there are fumaroles near the summit crater emitting sulfur, which were known to be active on July 6, 2007.

Klyuchevskaya Sopka is a stratovolcano, the highest mountain on the Kamchatka Peninsula of Russia and the highest active volcano of Eurasia. Its steep, symmetrical cone towers about 100 kilometres (60 mi) from the Bering Sea. The volcano is part of the natural Volcanoes of Kamchatka UNESCO World Heritage Site.

Nanga Parbat is one of the highest mountain in the World. It is the western anchor of the Himalayas around which the Indus river skirts before it debouches into the plains of Pakistan. It is located in the Gilgit-Baltistan region of Pakistan, and is locally known as ‘Deo Mir’ (‘mir’ meaning ‘mountain’). Nanga Parbat is one of the eight-thousanders, with a summit elevation of 8,126 metres (26,660 ft). An immense, dramatic peak rising far above its surrounding terrain, Nanga Parbat is also a notoriously difficult climb.

Mauna Kea also called Mauna a Wākea in Hawaiian culture, is a dormant Volcano on the island of Hawai’i. Standing 4,205 m (13,796 ft) above sea level, its peak is the highest point in the state of Hawaii. Much of the mountain is under water; when measured from its oceanic base, Mauna Kea is over 10,000 m (33,000 ft) tall, significantly taller than Mount Everest. Mauna Kea is about a million years old, and has thus passed the most active shield stage of life hundreds of thousands of years ago.

Jengish Chokusu is the highest mountain in the Tian Shan mountain system at 7,439 metres (24,406 ft). It lies on the Kyrgyzstan-China border, in the Kakshaal Too, the highest part of the Tien Shan, southeast of lake Issyk Kul. Jengish Chokusu is a massif, with several summits along its lengthy ridge. Only its main summit breaks 7,000 m.

Chimborazo is a currently inactive stratovolcano located in the Cordillera Occidental range of the Andes. Its last known eruption is believed to have occurred around 550 AD. With a peak elevation of 6,268 metres (20,564 ft), Chimborazo is the highest mountain in Ecuador. It is the highest peak in proximity to the equator. While Chimborazo is not the highest mountain by elevation above sea level, its location along the equatorial bulge makes its summit the farthest point on the Earth’s surface from the Earth’s center.

Namcha Barwa or Namchabarwa is a mountain in the Tibetan Himalaya. The traditional definition of the Himalaya extending from the Indus River to the Brahmaputra would make it the eastern anchor of the entire mountain chain, and it is the highest peak of its own section as well as Earth’s easternmost peak over 7,600 metres. Namcha Barwa is in an isolated part of southeastern Tibet rarely visited by outsiders.

Mount Rainier is a massive stratovolcano located 54 miles southeast of Seattle in the state of Washington, United States. It is the most topographically prominent mountain in the contiguous United States and the Cascade Volcanic Arc, with a summit elevation of 14,411 feet. Mt. Rainier is considered one of the most dangerous volcanoes in the World, and it is on the Decade Volcano list. Because of its large amount of glacial ice, Mt. Rainier could potentially produce massive lahars that would threaten the whole Puyallup River valley.

5 Reasons It Might Be a Good Time to Visit Egypt
The 8 Best Volcanoes to Climb in East Africa
Mumbai-Gateway of India
World’s Most Isolated & Remote Places
Categories: Travel