20 Great Spots to Vacation in the Tropics 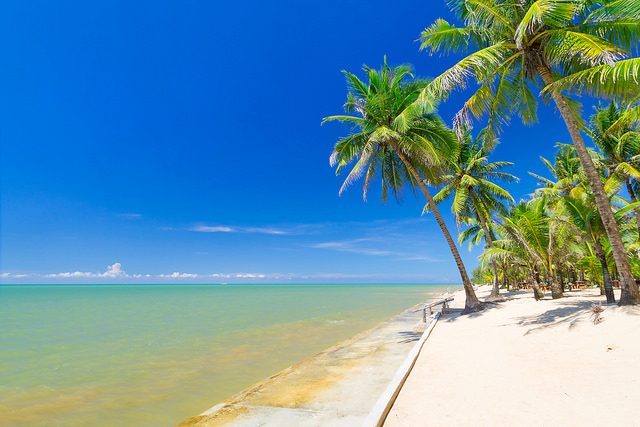 Here is a look at some of the world’s best tropical vacation spots. Most, of course, are the beautiful white sand beaches fringed with palm trees. From Hawaii to the Virgin Islands anyone of these qualifies as a bucket list destination so start planning your trip to today.

Bali is an island and province of Indonesia. The province includes the island of Bali and a few smaller neighbouring islands, notably Nusa Penida, Nusa Lembongan, and Nusa Ceningan. It is located at the westernmost end of the Lesser Sunda Islands, between Java to the west and Lombok to the east. Its capital of Denpasar is located at the southern part of the island.

Jamaica, a gorgeous Island nation offer sundrenched beaches, emerald jungles, crystal clear blue Caribbean waters and rugged mountains makes it a perfect travel vacation. Situated in the Caribbean Sea the Jamaican island is wonderfully diverse island which are favorite travel vacation destination for vacationers in the Caribbean. Tourists from all around the globe come to this beautiful island to soak in the sun and enjoy crystal clear waters, warm climate and amazing watersports.

The Island of Hawaii, also called the Big Island or Hawai’i Island, is a volcanic island (the eastern-most and southern-most in the Hawaiian islands chain) in the North Pacific Ocean. With an area of 4,028 square miles (10,430 km sq.), it is larger than all of the other Hawaiian Islands combined and is the largest island in the United States.

Guanacaste is a province of Costa Rica located in the northwestern part of the country, along the coast of the Pacific Ocean. Tourism spreads across Guanacaste’s 5,921 sq. miles and more than 400 miles of coast line. Main attractions of tourists include water, land, mountains, volcanos, and coastal ecosystems. The two main commercial areas Santa Cruz and Liberia with five surrounding tourism development centers: Papagayo, El Coco, Flamingo, Conchal, and Tamarindo.

The Florida Keys are a coral archipelago in southeast United States. They begin at the southeastern tip of the Florida peninsula, about 15 miles (24km) south of Miami, and extend in a gentle arc south-southwest and then westward to Key West, the westernmost of the inhabited islands, and on to the uninhabited Dry Tortugas. The islands lie along the Florida Straits, dividing the Atlantic Ocean to the east from the Gulf of Mexico to the west, and defining one edge of Florida Bay.

Located in the north eastern Caribbean Sea, Puerto Rico is an island nation, which is a modern, progressive and civilized popular Family vacation destination. This country is an archipelago of few breathtaking islands and is also an electrifying fusion of Spanish, Taíno and African influences. This picturesque island nation attracts numerous vacationers with its splendid natural scenery, year-round temperate weather, White Sandy beaches, lush tropical rainforests and the liveliest cultures.

A British overseas territory and a part of the British West Indies, the British Virgin Islands (BVI) is located about 60 miles east of Puerto Rico. The BVI is an excellent collection of 60 gorgeous tropical islands in the northeastern Caribbean. The plentiful and majestic natural locations of this island country are a must-visit tourist destination, offering stunning picturesque islands, numerous recreational activities and friendly people. This Boating capital of the Caribbean has its own special character, legends, beauty, culture and history.

Dominican Republic is a popular country in the Caribbean region, located on the island of Hispaniola. Today, the primary industry of Dominican Republic is tourism. It is widely famous for its large all-inclusive beach-front resorts. The other most popular attractions in the country are picturesque green mountains and hills. Besides, there are many other major attractions as well, including Palm-fringed beaches, casinos, a rich history and culture, year-round events and adventure sports that ideally make prime holiday spot for North Americans, Latin Americans and Europeans.

Phuket, a rainforested, mountainous island in the Andaman Sea, has some of Thailand’s most popular beaches, mostly situated along the clear waters of the western shore. The island is home to many high-end seaside resorts, spas and restaurants. Phuket City, the capital, has old shophouses and busy markets. Patong, the main resort town, has many nightclubs, bars and discos.

The picturesque island of Aruba is gifted with magnificent natural attractions such as pristine soft white sands beaches, unusual landscapes, crystal clear blue waters, coral reefs and rugged cliffs. The serene Caribbean Sea is ideally suitable for swimming, diving and snorkeling. There is something for everyone in Aruba from magnificent beaches to scenic locales to contemporary resorts and hotels to tremendous dining to swanky casinos and lots more.

Grand Cayman is the largest of the three Cayman Islands and the location of the nation’s capital, George Town. In relation to the other two Cayman Islands, it is approximately 75 miles (121 km) southwest of Little Cayman and 90 miles (145 km) southwest of Cayman Brac. Of the flora, a good representation of the variety of plant life on Grand Cayman can be found at the Queen Elizabeth II Botanic Park located in the North Side District.

Discovered by Christopher Columbus in the year 1492, the Islands of the Bahamas are blessed with perfect location extending 760 miles from the coast off Florida. Today, The Bahamas has become one of the World’s leading vacation resorts, offering tourists a truly tropical paradise of 700 Islands and 2000 cays dotted across the Atlantic Ocean and the Caribbean Sea. Renowned worldwide as a popular winter holiday destination, the Bahamas is only a few miles from the south Florida coast and the islands can be reached quickly either by air or by sea.

Bora Bora is an island in the Leeward group of the Society Islands of French Polynesia, an overseas collectivity of France in the Pacific Ocean. The island, located about 230 kilometres (143 miles) northwest of Papeete, is surrounded by a lagoon and a barrier reef. In the Centre of the island are the remnants of an extinct volcano rising to two peaks, Mount Pahia and Mount Otemanu, the highest point at 727 metres (2,385 feet).

Turks and Caicos Islands are renowned for its fabulous beaches and offer some of the best outdoor recreational activities. Tourists from around the World come here for relaxing and spending a quiet vacation in the company of serene natural beauty. The crystal clear waters surrounding the islands are rich in coral reefs and offer excellent diving and snorkeling opportunities.

The Seychelles is an archipelago of 115 islands in the Indian Ocean, off East Africa. It’s home to numerous beaches, coral reefs and nature reserves, as well as rare animals such as giant Aldabra tortoises. Mahé, a hub for visiting the other islands, is home to capital Victoria. It also has the mountain rainforests of Morne Seychellois National Park and beaches, including Beau Vallon and Anse Takamaka.

Imagine this archipelago consisting of 15 beautiful islands spread out within an area of 2.2 square kilometers of the South Pacific Ocean where tourism facilities are very well developed to charm visitors from all around the World. Aitutaki Island is the other major tourist destination of this region featuring breathtakingly beautiful blue lagoons and white sandy beaches.

Renowned for its sugar exports and a flourishing tourism industry, Fiji is essentially endowed with large stocks of forests, minerals and marine fish resources. Attracting over 431,000 tourists every year, the Fijian culture is a large rich mosaic of Indian, Chinese, European and indigenous traditions which have harmoniously blended over time. Along with a terrain mostly consisting of mountains formed of volcanic origin, Fiji features numerous tropical rainforests, fire-cleared hills, fine beaches and large amounts of coconut plantations.