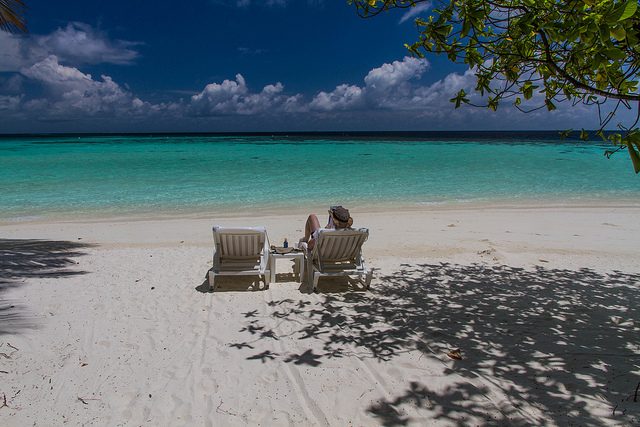 Most of us travel to get away from the everyday cares of life and see or experience something new. While some travelers look for adventures or thrills quite a few of just travel to unwind on a tropical beach with an ice cold drink.

If your idea of vacation is white sand beaches and a cool air conditioned hotel room to retire to in the hot afternoons then you will appreciate this list of our top places to relax and unwind in 2017. You wont be surprised to see that our list for 2017 includes some of the worlds best beaches.

Minorca or Menorca is the second largest of the Balearic Islands, located to the northeast of Mallorca and is the least overrun and most tranquil of the Balearics. Due to its unspoilt beauty, it allows the more adventerous the opportunity to discover new charms and experiences. Despite its smaller size among other Spanish islands, the number of beaches that Menorca has equals the number of beaches that can be found in Mallorca and Ibiza combined. The possibility of having a beautiful beach largely to yourself in the summer, combined with alfresco dining and peaceful holiday resorts, makes Minorca a highly desirable place to visit.

Cephalonia or Kefalonia, formerly also known as Kefallinia or Kephallenia, is the largest of the Ionian Islands in western Greece. Tourists from all over Greece, Europe and the World visit Cephalonia. It is a popular vacation destination for many Italians, due to its close proximity to Italy. As one of the largest islands in Greece, it is well-equipped to handle the influx of tourists during the summertime and it has something to offer everyone.

Lefkada is one of the most beautiful places in the Ionian Sea, with beaches such as Porto Katsiki and Eggremnoi. Porto Katsiki beach is firm favourite with tourists. A relatively large and pebbled beach surrounded by white cliffs. Eggremnoi, a famous beach of the island. After an eartquake in November 2015 caused rocks to fall on it and twisted the roads above it, it has been inaccessible. The wide and sheltered bay of Vasiliki in the South of the island is famous for its Wind Surfing .

Sharm el-Sheikh is a well-known port and resort town at the southern tip of the Sinai Peninsula in Egypt, popular with package holiday makers and divers. About 9,000 British tourists are in Sharm on any given day. Numbers have doubled in the last 3 years and seem set to continue to rise despite the worldwide economic situation. Sharm el-Sheikh is sometimes called the “City of Peace”, referring to the large number of international peace conferences that have been held there.

Dubrovnik is a stunningly intact walled city on the Adriatic Sea coast of the extreme south of Croatia. Although its population barely exceeds 40,000, it’s one of the most prominent tourist resorts of the Mediterranean and listed as a UNESCO World Heritage Site since 1979. Dubrovnik is steeped in stunning architecture and sculptural detail, and boasts spectacular churches, monasteries, museums, and fountains. A car free, sandy beach area on the Lapad Peninsula, approximately 3.5 km from the old town, where you can relax in the shade of the numerous trees.

Cozumel is a Caribbean island just off the Yucatan Peninsula in southeastern Mexico. It has great beaches, nice people, and safe streets, with prices comparable to other Mexican tourist destinations. Most visitors travel to Cozumel to dive and see its wonderful underwater life. While there are quite a few beach clubs that offer snorkeling, the main attractions are the reefs offshore and the multiple dive shops and operations are always ready to take you there.

Gozo is one of the three islands of the Maltese archipelago situated in the middle of the Mediterranean Sea, just 95km south of Sicily. It is smaller, more remote and less built-up than its sister island Malta, but it is a popular destination in its own right, particularly for more mature British and German couples and those who wish to immerse themselves in the culture of the place. With its pretty countrysides, beautiful sunsets, spectacular coastlines and a high concentration of churches, alongside historic fortifications and megalithic temples it makes a good excursion from Malta and an even better destination for a peaceful and relaxing short break.

Renowned for its sugar exports and a flourishing tourism industry, Fiji is essentially endowed with large stocks of forests, minerals and marine fish resources. Attracting over 431,000 tourists every year, the Fijian culture is a large rich mosaic of Indian, Chinese, European and indigenous traditions which have harmoniously blended over time. Along with a terrain mostly consisting of mountains formed of volcanic origin, Fiji features numerous tropical rainforests, fire-cleared hills, fine beaches and large amounts of coconut plantations.

A British overseas territory and a part of the British West Indies, the British Virgin Islands (BVI) is located about 60 miles east of Puerto Rico. The BVI is an excellent collection of 60 gorgeous tropical islands in the northeastern Caribbean. The plentiful and majestic natural locations of this island country are a must-visit tourist destination, offering stunning picturesque islands, numerous recreational activities and friendly people. This Boating capital of the Caribbean has its own special character, legends, beauty, culture and history.

Located in the north eastern Caribbean Sea, Puerto Rico is an island nation, which is a modern, progressive and civilized popular Family vacation destination. This country is an archipelago of few breathtaking islands and is also an electrifying fusion of Spanish, Taíno and African influences. The capital city of the country is San Juan. This picturesque island nation attracts numerous vacationers with its splendid natural scenery, year-round temperate weather, White Sandy beaches, lush tropical rainforests and the liveliest cultures.

Featuring some of the oldest and the best water wells in the World, Cyprus is the third largest island nation located within the Mediterranean Sea. Officially known as the Republic of Cyprus, it is home to Khirokitia, which is a Neolithic age archaeological find, a settlement now recognized as a UNESCO World Heritage Site. Dominated by a couple of mountains, the 9,251 square kilometers of Cyprus landscape features a sub-tropical Mediterranean climate, essentially distinguished by its semi-arid content.

The seven islands that form the Canarian archipelago are located about 1,000 km south of the Iberian Peninsula and only 115 km off the African coast. The eternal spring-like climate that provides good beach weather in all the seasons of the year without suffering extreme heat, also shapes the friendly, relaxed character of its inhabitants. The pleasant climate is long time the most famous quality of the Canary Islands.

Sardinia is a large island in the Tyrrhenian Sea, between the Balearic islands and the Italian peninsula and south of Corsica. It is an autonomous region which currently belongs to Italy. Sardinia, with its quintessential Mediterranean beauty, is mainly loved for swimming, boating, windsurfing, hiking, climbing, and camping, with coastal areas tending to become over touristed especially in the warmest month, August.

Crete is the largest of the Greek islands and is in the Mediterranean Sea between the Sea of Crete and the Libyan Sea, south of the Peloponnese. Crete is approximately 260 km long and 60 km wide. Crete is well known for its seas and beaches but it has a very contrasting landscape. The island goes from fertile coastal plains to rugged mountains and from busy metropolitan cities to very peaceful hillside villages.

Mauritius, officially the Republic of Mauritius, is an island nation in the Indian Ocean about 2,000 kilometres (1,200 mi) off the southeast coast of the African continent. Mauritius is one of the World’s top luxury tourism destinations. It possesses a wide range of natural and man-made attractions, enjoys a tropical climate with clear warm sea waters, attractive beaches, tropical fauna and flora complemented by a multi-ethnic and cultural population that is friendly and welcoming.

The Seychelles are a group of 115 islands, only a few inhabited, in the Indian Ocean that lie off the coast of East Africa, northeast of Madagascar. The beaches here are untouched by man’s influence and are refreshingly uncrowded. They offer clear blue skies and a tranquility you will rarely find. A hike along the coastline from Beau Vallon to Anse Major will take about 1.5-2 hours and your reward will be a small deserted beach that’s fit for a king. The scenery along the hike is breathtaking.

With over 37 species of Coarse and game fish waiting for you, Sweden has made a name for itself as one of the most popular northern European tourist destination. Sweden is less populated than most other parts of Europe, especially northern Norrland with the Laponia National Park. During the summer Kungsleden in northern Sweden attracts lots of visitors who enjoy a solitary hike between cabins or camp sites in the beautiful mountains.

Venice is one of the most interesting and lovely places in the world. This sanctuary on a lagoon is virtually the same as it was six hundred years ago, which adds to the fascinating character. Venice has decayed since its heyday and is heavily touristed (there are 56000 residents and 20 million tourists per year), but the romantic charm remains.

LThe ancient city of Marrakech often referred to as Rose City is one of the most enchanting places to visit in the World. The city located near the striking Atlas Mountains attracts tourists towards its grand colonial architecture, snake charmers, belly dancers and huge mosques. The city’s vibrant squares and colorful markets are not to be missed while touring Marrakech. The intriguing architecture of El Badi Palace that was built during the 16th century and featuring 360 rooms is one of the top tourist attractions in Marrakech.

The Maldives is a sovereign island country and archipelago in the Indian Ocean. It is located southwest of India and Sri Lanka in the Laccadive Sea. The chain of twenty six atolls stretches from Ihavandhippolhu Atoll to the Addu Atoll. The capital and largest city is Malé, traditionally called the “King’s Island”.