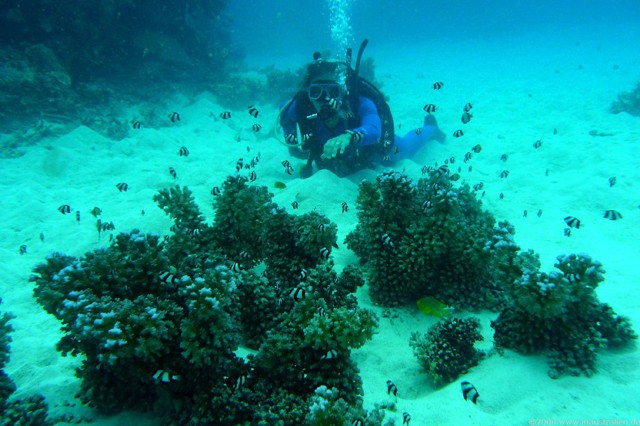 Here is a look at what might be 20 of the most amazing places for scuba diving around the world. Whether you are just learning or a professional diver this compilation of dive spots is sure to contain a few places that will make your bucket lists. Most of the worlds diving spots lie with the tropics where the ocean waters are warm and conditions are right for the growth of corals. We tended to focus on these in our list but one should not overlook locations outside the tropics and in the colder waters of the arctic. Climate change, pollution and over fishing threaten many of the best dive spots so take a minute and learn what you can do to protect reefs and marine life.

Papua New Guinea is an island nation, a land of breathtaking beauty, situated in the middle of Oceania, which is made up of hundreds of islands. In Papua New Guinea the adventure seekers will enjoy thrilling activities like sky diving, wind surfing, bungee jumping, off-roading, trekking, gliding, mountain biking along with few ocean activities such as scuba diving, surfing, kayaking and kite surfing.

One of the best known Fiji scuba diving destinations, Beqa Lagoon, lies just south of Viti Levu. The island has a land area of 36 square kilometers and reaches a maximum altitude of 462 meters.

Bora Bora is a major international tourist destination, famous for its aqua-centric luxury resorts. The major settlement, Vaitape, is on the western side of the main island, opposite the main channel into the lagoon. Snorkeling and scuba diving in and around the lagoon of Bora Bora are popular activities. Many species of sharks and rays inhabit the surrounding body of water. There are a few dive operators on the island offering manta ray dives and also shark-feeding dives.

The three islands of the Cayman Islands are the exposed top of an underwater mountain. Underwater, the sides of this mountain are quite steep, vertical in some places, within as little as a few hundred metres from shore. In addition to the expected coral reefs, colourful fish, and other underwater creatures, this “wall diving” provides something extraordinary for scuba divers. Scuba diving in the Caymans can be done by boat, or at many dive sites, directly from shore.

La Paz is the capital city of the Mexican state of Baja California Sur and an important regional commercial center. There are some 900 islands and inlets in the Gulf of California with 244 now under UNESCO protection as World Heritage Bio-Reserves and the Isla Espíritu Santo group, which borders the northeast portion of the Bay of La Paz and are considered the crown jewels of the islands of the Gulf, the primary tourist destination of the area. Its diving, snorkeling, and kayaking are considered world class.

The Galápagos Islands are an archipelago of volcanic islands distributed on either side of the Equator in the Pacific Ocean. The Galápagos Islands and their surrounding waters form an Ecuadorian province, a national park, and a biological marine reserve. There are only 116 visitor sites in the Galápagos: 54 land sites and 62 scuba-diving or snorkeling sites. Small groups are allowed to visit in 2- to 4-hour shifts only, to limit impact on the area. All groups are accompanied by licensed guides.

Playa del Carmen is a city located along the Caribbean Sea in the state of Quintana Roo in Mexico. It is a popular tourist area in eastern Mexico. Originally a small fishing town, tourism to Playa del Carmen began with the passenger ferry service to Cozumel, an island across the Cozumel Channel and a world famous scuba diving destination.

Semporna is a district as well as town located in Tawau Division, in the east coast of Sabah, Malaysia on the island of Borneo. Semporna is the gateway to diving paradise in World-renowned islands like Sipadan, Mabul, Kapalai, Mataking, Sibuan, Mantabuan, Siamil and Pom Pom among others. Visitors to Semporna are mainly sun seekers looking to relax or to take up water sports activities such as scuba diving or snorkelling.

Ambergris Caye, is the largest island of Belize located northeast of the country in the Caribbean Sea. The main attractions are the Belize Barrier Reef and its beaches. That barrier reef is the second largest in the World, after the Great Barrier Reef of Australia. The availability of skydiving during the winter has become a draw for tourists.

Cozumel is an island in the Caribbean Sea off the eastern coast of Mexico’s Yucatán Peninsula, opposite Playa del Carmen, and close to the Yucatán Channel. The economy of Cozumel is based on tourism. There are a number of visitors to the island’s balnearios, scuba diving, and snorkeling. The main town on the island is San Miguel de Cozumel.

Phuket is one of the southern provinces (changwat) of Thailand. It consists of the island of Phuket, the country’s largest island, and another 32 smaller islands off its coast. Many of the outlying islands are very popular destinations for tourists, divers and snorkelers, including the Phi Phi Islands and the Similan Islands.

Grand Turk serves as the capital island of the Turks and Caicos. The island is renowned for offering some of the best diving spots in the World. Every year thousands of snorkelers and scuba divers from around the world come here for exploring its outstanding protected coral reefs. Grand Turk also offers excellent whale watching opportunity as the shores and waters of the island are visited by humpback whales during the migratory season.

Big Bali is an island and province of Indonesia. The province includes the island of Bali and a few smaller neighbouring islands, notably Nusa Penida, Nusa Lembongan, and Nusa Ceningan. Bali is part of the Coral Triangle, the area with the highest biodiversity of marine species. In this area alone over 500 reef building coral species can be found. For comparison, this is about 7 times as many as in the entire Caribbean. There is a wide range of dive sites with high quality reefs, all with their own specific attractions.

Yap Islands often referred to as “The Forbidden Island” is World renowned for its stone money. Tourists throng Yap for getting acquainted with the ancient Micronesian culture and exploring the undersea world at its numerous dive sites. The islands present visitors with a unique blend of the old and new. Yap Island is blessed with several pristine beaches that offer some of the best snorkeling and swimming opportunities. The islands sun kissed beaches are best suited for unwinding and relaxing.

The Gili Islands are an archipelago of three small islands Gili Trawangan, Gili Meno and Gili Air just off the northwest coast of Lombok, Indonesia. The islands are a popular destination for tourists looking for a remote island experience. Each island has several small resorts, usually consisting of a collection of huts for tourists, a small pool and restaurant. Diving in and around the Gilis is also popular due to the abundance of marine life and attractive coral formations

A part of the Leeward Antilles, Bonaire Island surrounded by a marine park is famous for hiking, snorkeling and scuba diving opportunities abundantly available in this region. Home to large number of pink flamingoes, Bonaire also features the only barefoot casino within the Caribbean. Renowned for some of the World’s excellent diving sites and best destinations for snorkeling, Bonaire also provides great opportunities for wind-surfing as well.

The late Jacques Cousteau, a World-renowned oceanographer, once described Sipadan Island as an untouched piece of art while divers around the world have voted it as one of the top five dive sites in the world. Rising 700m from the sea floor and at only 12ha., Malaysia’s sole oceanic island is very small in size. A 25-minute walk is all that is needed to circle the island on foot, but the huge amount of diverse marine life it attracts from the blackness of the open sea is simply mindblowing. Surrounded by crystal clear waters, this crown jewel is a treasure trove of some of the most amazing species out there.

Utila (Isla de Utila) is the third largest of Honduras’ Bay Islands, after Roatán and Guanaja, in a region that marks the south end of the Mesoamerican Barrier Reef System, the second-largest in the World. With favourable diving conditions, the island increasingly attracts general tourists, along with more traditional international backpacker visitors. More than eighty diving sites are located around the island among its extensive reefs teeming with marine life, including the elusive whale shark.

Puerto Galera is the northwesternmost municipality in the province of Oriental Mindoro, Philippines. This coastal town is well known among tourists for its numerous pocket beaches and many snorkeling and Scuba diving spots. Puerto Galera is among the top diving destination in the Philippines. Excellent diving is found less than 5 minutes from Sabang Beach. The diving generally focuses around the areas either side of Escarceo Point. Marine life is highly diverse.