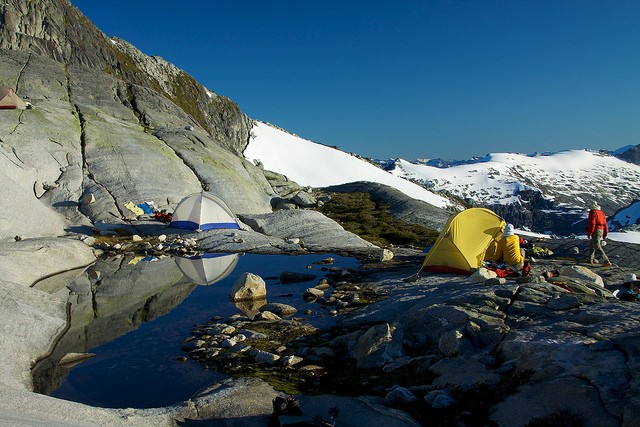 Do you love camping and getting away from everything? Here is a look at 20 amazing places to set up your tent in 2016. While this is not a list of actual campsites all the destinations on the list offer plenty of opportunities for camping both in established sites and off the beaten track. Yellowstone National Park in the United States is a great option from June to July and can be combined with other destinations such as Glacier and the Grand Tetons. If you are heading to Africa on a budget then camping out is the best way to make a safari affordable. The national parks in Kenya and Tanzania offer some great camping options. Big Sur and the California cost offer some excellent camping options but you need to book way in advance. Here is a look at the top 20 that made our list

The Lake District, also known as The Lakes or Lakeland, is a mountainous region in North West England. A popular holiday destination, it is famous for its lakes, forests and mountains. The lakes and mountains combine to form impressive scenery. Farmland and settlement add aesthetic value to the natural scenery with an ecology modified by human influence for millennia and including important wildlife habitats.

Denali National Park and Preserve is a national park and preserve located in Interior Alaska, centered on Denali, the highest mountain in North America. Located in the Central area of the Alaska Range, a mountain chain extending 600 miles (970 km) across Alaska. Its best-known geologic feature is Denali, formerly known as Mount McKinley.

Masai Mara National Reserve is one of Kenya’s most popular and widely visited National Parks in the country. Incredibly rich in wildlife, the Masai Mara reserve is famous for its annual migration of the wildebeest which is called the “Great Migration”. Comprises an area of 1510 sq kms, this reserve is one of the leading tourist destinations in Kenya, which is located in the south-western region of the country.

Jasper National Park is the largest national park in the Canadian Rockies, spanning 10,878 km². It is located in the province of Alberta, north of Banff National Park and west of the City of Edmonton. The park includes the glaciers of the Columbia Icefield, hot springs, lakes, waterfalls and mountains.

Haleakala National Park is a United States national park located on the island of Maui in the state of Hawaii. The park covers an area of 33,265 acres, of which 19,270 acres is a wilderness area. The park area was designated an International Biosphere Reserve in 1980.

The Blue Mountains National Park is a national park in New South Wales, Australia, 81 km west of Sydney, and located in the Blue Mountains region of the Great Dividing Range. The park covers 268,987 hectares. The boundary of the park is quite irregular as it is broken up by roads, urban areas and inholdings. Despite the name ‘mountains’, the area is an uplifted plateau, dissected by a number of larger rivers.

Glacier National Park is a national park located in the U.S. state of Montana, on the Canada–United States border with the Canadian provinces of Alberta and British Columbia. The park encompasses over 1 million acres (4,000 sq km) and includes parts of two mountain ranges (sub-ranges of the Rocky Mountains), over 130 named lakes, more than 1,000 different species of plants, and hundreds of species of animals.

Sangla Valley or the Baspa Valley starts at Sangla and ends at Chitkul. The valley is surrounded by forested slopes and offers views of the high mountains. Its location in the greater Himalayan range gives it a milder climate Than the plains. Sangla Valley is a part of Kinnaur and inhibited by Kinnauris. The main livelihood is agriculture while apples are a major cash crop here. A part of the population also depends on tourism.

Pacific Rim National Park Reserve is a Canadian national park reserve in British Columbia made up to have with parks of three separate regions: Long Beach, the Broken Group Islands, and the West Coast Trail. The entire park encompasses 511 km² (197 sq mi) of land and ocean. The park is characterized by rugged coasts and lush temperate rainforests. The park is open from mid-March until mid-October.

Cotopaxi National Park is a protected area in Ecuador situated in the Cotopaxi Province, Napo Province and Pichincha Province. The volcano that lends its name to the park is located within its boundaries, roughly 50 km south of Quito. Cotopaxi volcano is among the tallest active volcanoes in the World.

Yosemite National Park is a United States National Park spanning eastern portions of Tuolumne, Mariposa and Madera counties in the central eastern portion of California, United States. The park covers an area of 761,268 acres and reaches across the western slopes of the Sierra Nevada mountain chain. Over 3.7 million people visit Yosemite each year: most spend their time in the seven square miles of Yosemite Valley.

Shenandoah National Park encompasses part of the Blue Ridge Mountains in the U.S. state of Virginia. This national park is long and narrow, with the broad Shenandoah River and Valley on the west side, and the rolling hills of the Virginia Piedmont on the east. Although the scenic Skyline Drive is likely the most prominent feature of the Park, almost 40% of the land area 79,579 acres has been designated as wilderness and is protected as part of the National Wilderness Preservation System.

Itsukushima is an island in the western part of the Inland Sea of Japan, located in the northwest of Hiroshima Bay. It is popularly known as Miyajima , the Shrine Island. The island is one of Hayashi Razan’s Three Views of Japan. Itsukushima is famous for the Itsukushima Shrine, a UNESCO World Heritage Site.

Big Sur is a sparsely populated region of the Central Coast of California where the Santa Lucia Mountains rise abruptly from the Pacific Ocean. The terrain offers stunning views, making Big Sur a popular tourist destination. Big Sur’s Cone Peak is the highest coastal mountain in the contiguous 48 states, ascending nearly a mile (5,155 feet/1571 m) above sea level, only three miles (4.8 km) from the ocean.

Arran or the Isle of Arran is the largest island in the Firth of Clyde, Scotland. With an area of 432 square kilometres it is the seventh largest Scottish island. Arran is mountainous and has been described as a “geologist’s paradise”. There is diversity of wildlife, including three species of tree endemic to the area.

A backpacker’s paradise, the Corcovado National Park (CNP) features one of the only remaining areas of the old growth wet forests, which are located along the Pacific coast of the Central Americas. An essential part of the Osa Conservation Area, Corcovado National Park features sizeable habitats beholding a rich and healthy biodiversity which when coupled by the lowland tropical rainforests provides excellent wildlife viewing opportunities.

Yellowstone National Park is a national park located primarily in the U.S. state of Wyoming, although it also extends into Montana and Idaho. Yellowstone, widely held to be the first national park in the World, is known for its wildlife and its many geothermal features, especially Old Faithful Geyser, one of the most popular features in the park. It has many types of ecosystems, but the subalpine forest is most abundant.

Myvatn is a shallow eutrophic lake situated in an area of active volcanism in the north of Iceland, not far from Krafla volcano. The lake and its surrounding wetlands have an exceptionally rich fauna of waterbirds, especially ducks. The lake was created by a large basaltic lava eruption 2300 years ago, and the surrounding landscape is dominated by volcanic landforms, including lava pillars and rootless vents.

Sardinia is the second-largest island in the Mediterranean Sea (after Sicily and before Cyprus). It is an autonomous region of Italy, and the nearest land masses are (clockwise from north) the French island of Corsica, the Italian Peninsula, Sicily, Tunisia and the Spaniard Balearic Islands.

Ladakh is a region of Jammu and Kashmir, a disputed territory between India and Pakistan. Part of Ladakh is included in Pakistan (Gilgit-Baltistan). Ladakh lies between the Kunlun mountain range in the north and the main Great Himalayas to the south, inhabited by people of Indo-Aryan and Tibetan descent. It is one of the most sparsely populated regions in Jammu and Kashmir.