World
Home » Travel » 15 Must See Historic and Cultural Monuments
May 5, 2016 by David Urmann

15 Must See Historic and Cultural Monuments 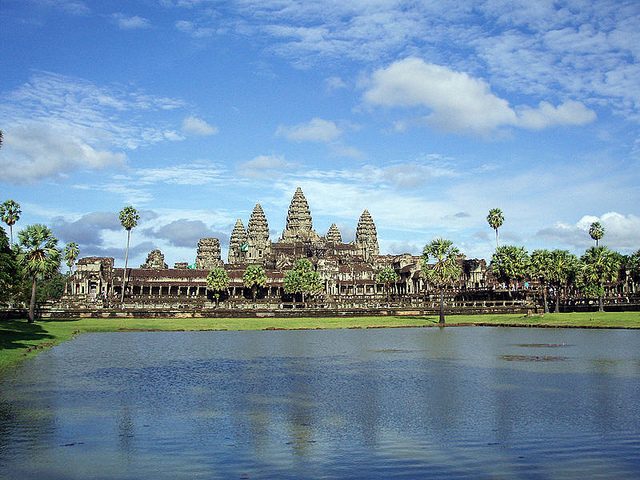 Are you a history buff or maybe just need some inspiration for your next journey. Here is a look at 15 cultural and historic sites that have shaped the world. With so many places to choose from it was difficult to pick just 15. Some of the favorites we left off the list but certainly deserve to be considered are Tikal in Guatemala, Borobudur in Indonesia, The Forbidden City in China and many more. Let us know where you are headed next!

The Kaaba is a cuboid-shaped building in Mecca, Saudi Arabia, and is the most sacred site in Islam.The building has a mosque (Masjid) built around it, the Masjid al-Haram. All Muslims around the World are supposed to face the Kaaba during prayers, no matter where they are. From any given point in the world, the direction facing the Kaaba is called the Qibla.

The Taj Mahal is a white marble mausoleum located on the southern bank of the Yamuna River in the Indian city of Agra. It was commissioned in 1632 by the Mughal emperor Shah Jahan (reigned 1628–1658) to house the tomb of his favorite wife of three, Mumtaz Mahal. The Taj Mahal is regarded by many as the best example of Mughal architecture and is widely recognized as “the jewel of Muslim art in India”. It is one of the World’s most celebrated structures and a symbol of India’s rich history.

Angkor Wat is a temple complex in Cambodia and the largest religious monument in the World. Angkor Wat combines two basic plans of Khmer temple architecture: the temple-mountain and the later galleried temple. It is designed to represent Mount Meru, home of the devas in Hindu mythology: within a moat and an outer wall 3.6 kilometres (2.2 mi) long are three rectangular galleries, each raised above the next.

5. The Great Wall of China, China

The Great Wall of China is a series of fortifications made of stone, brick, tamped earth, wood, and other materials, generally built along an east-to-west line across the historical northern borders of China to protect the Chinese states and empires against the raids and invasions of the various nomadic groups of the Eurasian Steppe.

In 1491, Wat Phra Si Sanphet was located inside the compound of the Grand Palace-the foundations of which are still visible-and served as the royal chapel, as Wat Phra Kaeo does in Bangkok. This Wang Lung Palace (Royal Palace) was built by King U-Thong upon the founding of the city. Used as a residential palace, it became a monastery in the reign of King Ramathibodi I.

Chichen Itza was a large pre-Columbian city built by the Maya civilization. Located in the eastern portion of Yucatán state in Mexico. The northern Yucatán Peninsula is arid, and the rivers in the interior all run underground. There are two large, natural sink holes, called cenotes, that could have provided plentiful water year round at Chichen, making it attractive for settlement.

Machu Picchu is a 15th-century Inca site located 2,430 metres above sea level. It is located in the Cusco Region, Urubamba Province, Machupicchu District in Peru. It is situated on a mountain ridge above the Sacred Valley which is 80 kilometres (50 mi) northwest of Cuzco and through which the Urubamba River flows. Most archaeologists believe that Machu Picchu was built as an estate for the Inca emperor Pachacuti. Often mistakenly referred to as the “Lost City of the Incas”, it is the most familiar icon of Inca civilization.

10. The Great Pyramid of Giza, Egypt

The Great Pyramid of Giza is the oldest and largest of the three pyramids in the Giza Necropolis bordering what is now El Giza, Egypt. It is the oldest of the Seven Wonders of the Ancient World, and the only one to remain largely intact. Egyptologists believe that the pyramid was built as a tomb for fourth dynasty Egyptian Pharaoh Khufu (Cheops in Greek) over an approximately 20 year period concluding around 2560 BC.

Petra is a historical and archaeological city in the southern Jordanian governorate of Ma’an that is famous for its rock-cut architecture and water conduit system. Another name for Petra is the Rose City due to the color of the stone out of which it is carved. Established possibly as early as 312 BC as the capital city of the Nabataeans, it is a symbol of Jordan, as well as Jordan’s most-visited tourist attraction.

Hagia Sophia is a former Greek Orthodox patriarchal basilica (church), later an imperial mosque, and now a museum (Ayasofya Müzesi) in Istanbul, Turkey. From the date of its construction in 537 until 1453, it served as an Eastern Orthodox cathedral and seat of the Patriarchate of Constantinople, except between 1204 and 1261, when it was converted to a Roman Catholic cathedral under the Latin Empire.

The Potala Palace is located in Lhasa, Tibet Autonomous Region, China. It is named after Mount Potalaka, the mythical abode of Chenresig or Avalokitesvara. The Potala Palace was the chief residence of the Dalai Lama until the 14th Dalai Lama fled to Dharamsala, India, during the 1959 Tibetan uprising. The site on which the Potala Palace rises is built over a palace erected by Songtsän Gampo on the Red Hill.

The Statue of Liberty is a colossal neoclassical sculpture on Liberty Island in New York Harbor, designed by Frédéric Bartholdi and dedicated on October 28, 1886. The statue, a gift to the United States from the people of France, is of a robed female figure representing Libertas, the Roman goddess of freedom, who bears a torch and a tabula ansata (a tablet evoking the law) upon which is inscribed the date of the American Declaration of Independence, July 4, 1776.

The Sultan Ahmed Mosque is a historic mosque in Istanbul. The mosque is popularly known as the Blue Mosque for the blue tiles adorning the walls of its interior. It was built from 1609 to 1616, during the rule of Ahmed I. Its Külliye contains a tomb of the founder, a madrasah and a hospice. The Sultan Ahmed Mosque is still popularly used as a mosque.