The 15 Deepest Canyons You Have to Visit 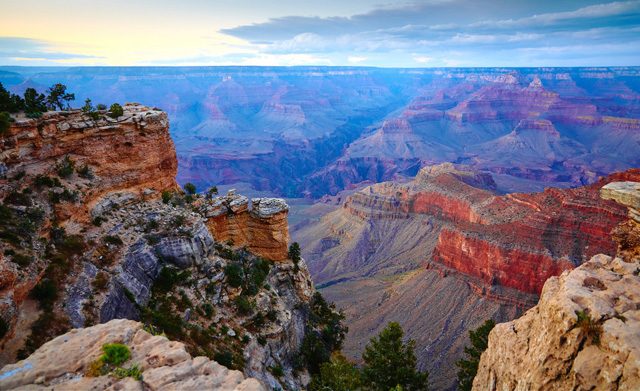 Actually measuring the deepest canyon is somewhat subjective when you consider not only depth but length as well. The Grand Canyon of the United States formed as it cut into and eroded the slowly uplifting Colorado Plateau. Whereas, others canyons have eroded through entire mountain ranges such as the Kali Gandaki Gorge in Nepal. Canyon systems that cut across entire mountain chains are often older then the mountains themselves. Here is a look at what might be the world’s 15 deepest canyons.

The Kali Gandaki Gorge or Andha Galchi is the gorge of the Kali Gandaki (or Gandaki River) in the Himalayas in Nepal. Gorge depth is difficult to define due to disagreement over rim height, but by some measures the Kali Gandaki is the deepest gorge in the World. The upper part of the gorge is also called Thak Khola after the local Thakali people who became prosperous from trans-Himalayan trade. Geologically, it is a downfaulted graben.

Tiger Leaping Gorge is a scenic canyon on the Jinsha River, a primary tributary of the upper Yangtze River. It is located 60 kilometres north of Lijiang City, Yunnan in southwestern China. It is part of the Three Parallel Rivers of Yunnan Protected Areas World Heritage Site. Tiger Leaping Gorge is a contender for the world’s deepest river canyon, depending on the exact definition used. The inhabitants of the gorge are primarily the indigenous Naxi people, who live in a handful of small hamlets. Their primary subsistence comes from grain production and foreign hikers.

Cotahuasi Canyon near the city of Arequipa in Peru is the deepest canyon in the World. Its maximum depth is 3535 metres in the vicinity of Ninancocha, 335 metres more than the Colca Canyon. The Cotahuasi Canyon is an impressive chasm that the river has eroded between two enormous mountain massifs: the Coropuna (6425 m.s.n.m.) and the Solimana (6093 m.s.n.m.). One extends from spurs of the snow-covered Solimana to the confluence with the Ocoña river.

Bryce Canyon National Park is a National Park located in southwestern Utah in the United States. The major feature of the park is Bryce Canyon, which despite its name, is not a canyon, but a collection of giant natural amphitheaters along the eastern side of the Paunsaugunt Plateau. Bryce is distinctive due to geological structures called hoodoos, formed by frost weathering and stream erosion of the river and lake bed sedimentary rocks. The red, orange, and white colors of the rocks provide spectacular views for park visitors. Bryce sits at a much higher elevation than nearby Zion National Park. The rim at Bryce varies from 8,000 to 9,000 feet.

Copper Canyon is a group of canyons consisting of six distinct canyons in the Sierra Madre in the southwestern part of the state of Chihuahua in Mexico. The overall canyon system is larger and portions are deeper than the Grand Canyon in neighboring Arizona. The canyons were formed by six rivers which drain the western side of the Sierra Tarahumara (a part of the Sierra Madre Occidental). All six rivers merge into the Rio Fuerte and empty into the Sea of Cortez. The walls of the canyon are a copper/green color which is where the name originates.

The Grand Canyon, is a steep-sided canyon carved by the Colorado River in the state of Arizona in the United States. It is contained within and managed by Grand Canyon National Park, the Kaibab National Forest, Grand Canyon-Parashant National Monument, the Hualapai Tribal Nation, the Havasupai people and the Navajo Nation. President Theodore Roosevelt was a major proponent of preservation of the Grand Canyon area, and visited it on numerous occasions to hunt and enjoy the scenery.

The Tara River Canyon, also known as the Tara River Gorge, is the longest canyon in Montenegro. It is 82 kilometers (50 mi) long and is 1,300 meters(4265 feet) at its deepest, making it the deepest river canyon in Europe. The canyon is protected as a part of Durmitor National Park and is a tentative UNESCO World Heritage Site. The Tara River cuts through the canyon.

Sumidero Canyon is a narrow and deep canyon surrounded by a national park located just north of the city of Chiapa de Corzo in the Mexican state of Chiapas. The canyon’s creation began around the same time as the Grand Canyon in the U.S. state of Arizona, by a crack in the area’s crust and erosion by the Grijalva River, which still runs through it. The canyon has vertical walls which reach as high as 1000 meters, with the river turning up to ninety degrees during the thirteen kilometers that the narrow passage runs.

Waimea Canyon, also known as the Grand Canyon of the Pacific, is a large canyon, approximately ten miles (16 km) long and up to 3,000 feet deep, located on the western side of Kauaʻi in the Hawaiian Islands. Waimea is Hawaiian for “reddish water,” a reference to the erosion of the canyon’s red soil. The canyon was formed by a deep incision of the Waimea River arising from the extreme rainfall on the island’s central peak, Mount Waiʻaleʻale, among the wettest places on earth.

The Blyde River Canyon is a significant natural feature of South Africa, located in Mpumalanga, and forming the northern part of the Drakensberg escarpment. It is 16 miles (26 km) in length and is, on average, around 2,500 feet deep. The Dam itself, when full, is at an altitude of 665m. The Canyon consists mostly of red sandstone. The highest point of the canyon, Mariepskop, is 6,378 feet above sea level, whilst its lowest point where the river leaves the canyon is slightly less than 1,840 feet above sea level. This means that by some measure the Canyon is over 4,500 feet deep.

The Verdon Gorge in south-eastern France (Alpes-de-Haute-Provence), is a river canyon that is often considered to be one of Europe’s most beautiful. It is about 25 kilometres long and up to 700 metres deep. It was formed by the Verdon River, which is named after its startling turquoise-green colour, one of the canyon’s most distinguishing characteristics. The most impressive part lies between the towns of Castellane and Moustiers-Sainte-Marie, where the river has cut a ravine up to 700 metres down through the limestone mass.

The Fish River Canyon is located in the south of Namibia. It is the second largest canyon in the World and the largest in Africa, as well as the second most visited tourist attraction in Namibia. It features a gigantic ravine, in total about 100 miles (160 km) long, up to 27 km wide and in places almost 550 metres deep. The Fish River is the longest interior river in Namibia. It cuts deep into the plateau which is today dry, stony and sparsely covered with hardy drought-resistant plants.

Charyn Canyon is an 80 km canyon in Kazakhstan on the Charyn River, 200 km east of Almaty, close to the Chinese border. It is part of the Charyn National Park, which is established 23 February 2004 and located within the territory of the Uyghur and Kegen Districts of the Almaty Province. It stretches 154 kilometres along the Charyn River in the northern Tien Shan mountain range. In parts, it attains a depth of 150 to 300 metres. One part of it is known as Valley of Castles for its unusual rock formations. The width of it ranges from 20 to 80 metres and the length is 2 kilometres.

Snake River Canyon is a large canyon formed by the Snake River in the Magic Valley region of southern Idaho. It is well known as the site of an unsuccessful 1974 attempt by Evel Knievel to jump it in the Skycycle X-2. Perrine Bridge crosses the canyon immediately north of Twin Falls. In places the canyon is 500 feet (166 meters) deep and 0.25 miles (0.41 kilometers) wide. Shoshone Falls is located approximately 5 miles (8.33 kilometers) east of Perrine Bridge in the canyon.