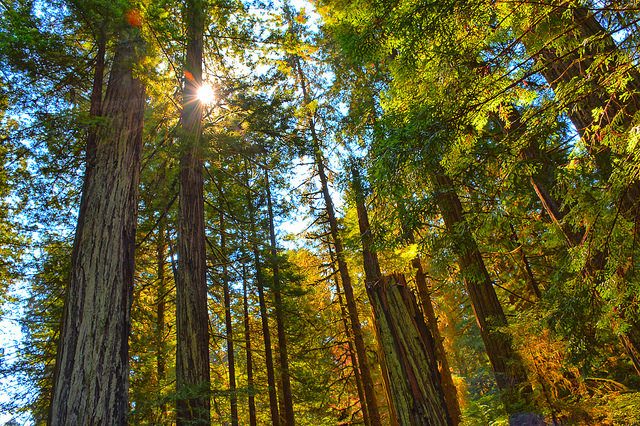 Old Growth forests have been undisturbed throughout the centuries. The ancient trees that grow in these forests host a rich ecological diversity that far exceeds that in forests that have been disturbed by clearing and logging activities. Unfortunately, these forests are a rarity and it’s important that the few remaining examples receive some type of protected status. It’s an amazing experience to visit one of these forests firsthand. Here is a look at some of the world’s last remaining old growth forests.

The Tarkine is an area containing the Savage River National Park in the north west Tasmania, Australia, which environmental non-government organisations claim contains significant areas of wilderness. The Tarkine is noted for its beauty and natural values, containing the largest area of Gondwanan cool-temperate rainforest in Australia, as well as for its prominence in Tasmania’s early mining history. The area’s high concentration of Aboriginal sites has led to it being described by the Australian Heritage Council as “one of the World’s great archaeological regions”.

Yakushima is a town located in Kumage District, Kagoshima, Japan. The town is on the island of Yakushima and Kuchinoerabujima. Yakushima is famous for its lush vegetation. Most of the island has at one time or another been logged, but has been extensively replanted and reseeded since logging ended in the late 1960s, at which time a conservation regime was established. In addition to this secondary forest, there are some remaining areas of primary forest, composed mainly of a variety of Cryptomeria japonica, or Japanese cedar, known as yakusugi, the best known single example of which is named the Jomon Sugi, as its age is estimated to date to at least the Jomon period of Japanese history, 2300 years ago.

The Tongass National Forest in southeastern Alaska is the largest national forest in the United States at 17 million acres. Most of its area is part of the temperate rain forest WWF ecoregion, itself part of the larger Pacific temperate rain forest WWF ecoregion, and is remote enough to be home to many species of endangered and rare flora and fauna. Tongass encompasses islands of the Alexander Archipelago, fjords, glaciers, and peaks of the Coast Mountains. An international border with Canada (British Columbia) runs along the crest of the Boundary Ranges of the Coast Mountains .

Kakamega Forest is situated in Western Province Kenya, north-west of the capital Nairobi, and near to the border with Uganda. It is said to be Kenya’s last remnant of the ancient Guineo-Congolian rainforest that once spanned the continent. ncluding reserves, the forest encloses about 230 square kilometres, a little less than half of which currently remains as indigenous forest. There are numerous grassy clearings and glades. Large mammals are rare. Part of the forest also contain unique and rich highland ecosystems, but generally the fauna and flora of the Forest have not been comprehensively studied by science.

Białowieża Forest, known as Belovezhskaya Pushcha (Belarusian: Белавежская пушча) in Belarus and Puszcza Białowieska in Poland, is an ancient woodland that straddles the border between the two countries, located 70 km (43 mi) north of Brest (Belarus) and 62 km (39 mi) southeast of Białystok (Poland). It is one of the last and largest remaining parts of the immense primeval forest that once stretched across the European Plain. This UNESCO World Heritage Site and Biosphere Reserve lies in parts of the Brest Voblast and Hrodna Voblast in Belarus and on the Polish side near the town of Białowieża in the Podlaskie Voivodeship.

8. The Amazon, Brazil and Peru

The Amazon Rainforest, also known in English as Amazonia or the Amazon Jungle, is a moist broadleaf forest that covers most of the Amazon Basin of South America. This basin encompasses seven million square kilometers (1.7 billion acres), of which five and a half million square kilometers (1.4 billion acres) are covered by the rainforest. This region includes territory belonging to nine nations. The majority of the forest is contained within Brazil, with 60% of the rainforest, followed by Peru with 13%, and with minor amounts in Colombia, Venezuela, Ecuador, Bolivia, Guyana, Suriname and France (French Guiana). States or departments in four nations bear the name Amazonas after it.

Waipoua Forest preserves some of the best examples of Kauri forest remaining in New Zealand. It is notable for having two of the largest living kauri trees, Tane Mahuta and Te Matua Ngahere. The forest was declared a sanctuary in 1952. The Waipoua, Warawara and Puketi Forests together contain about three quarters of New Zealand’s remaining mature kauri trees. The Waipoua forest holds the largest remaining stand of these trees. It contains Te Matua Ngahere, a notable kauri tree that is the largest in New Zealand by girth and the second largest by volume, and is estimated to be from 2,000 to 3,000 years old.

Braulio Carrillo National Park is a National Park of the Volcanic Cordillera Conservation Area in Costa Rica located on the eastern edge of the central volcanic corridor between San José and Puerto Limón. It is accessible from the Limon Highway, which bisects the park running roughly east-west, and Barva, in the north. The park contains many notable geological features, such as the Barva Volcano, Hondura River, Patria River, and the mineral-discolored Súcio River. The park is separated into three main sectors – Zurquí, Quebrada Gonzales, and Barva.

10 Massive Trees You Can Climb
World’s Most Isolated & Remote Places
15 Badlands That You Have to See to Believe
The World’s 25 Most Beautiful Valleys
Categories: Travel