10 Massive Trees You Can Climb 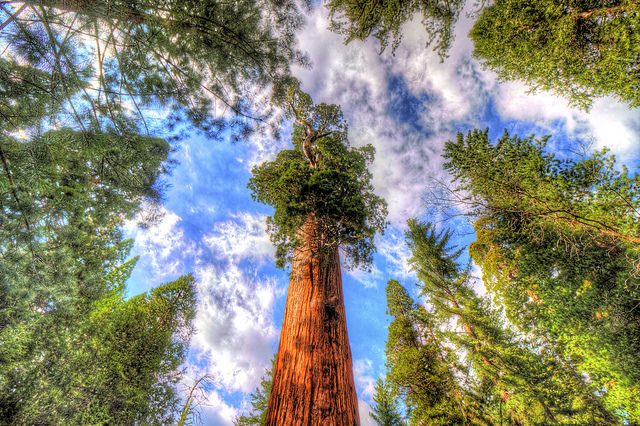 Lost Monarch is the name of a Coast Redwood (Sequoia sempervirens) tree in Northern California that is 26 feet (7.9 m) in diameter at breast height (with multiple stems included), and 320 feet (98 m) in height. It is the World’s fifth largest coast redwood in terms of wood volume (the Del Norte Titan was listed as the largest single-stem coast redwood tree, in part because the basal measurements of the Lost Monarch contain multiple stems).

El Árbol del Tule is a tree located in the church grounds in the town center of Santa María del Tule in the Mexican state of Oaxaca, approximately 9 km (6 mi) east of the city of Oaxaca on the road to Mitla. It is a Montezuma cypress (Taxodium mucronatum), or ahuehuete (meaning “old man of the water” in Nahuatl). It has the stoutest trunk of any tree in the World. In 2001 it was placed on a UNESCO tentative list of World Heritage Sites.

Tāne Mahuta is a giant Kauri tree (Agathis australis) in the Waipoua Forest of Northland Region, New Zealand. Its age is unknown but is estimated to be between 1,250 and 2,500 years. It is the largest kauri known to stand today. Its Māori name means “Lord of the Forest”, from the name of a god in the Māori pantheon.

The “Quinault Lake Redcedar” is the largest known western redcedar in the World, with a wood volume of 17,650 cubic feet (500 m3). Located near the northwest shore of Lake Quinault north of Aberdeen, Washington, about 34 km (21 mi) from the Pacific Ocean, it is one-third the volume of the largest known tree, a giant sequoia named “General Sherman”. The Quinault Lake Redcedar is 174 feet (53 m) tall with a diameter of 19.5 feet (5.9 m) at breast height.

Methuselah is a Great Basin Bristlecone Pine (Pinus longaeva) tree growing high in the White Mountains of Inyo County in eastern California. Its age of around 4844-4845 years[a] makes it the World’s oldest known living non-clonal organism. The ancient tree is named after Methuselah, a Biblical figure having the longest mentioned lifespan in the Bible of 969 years.

Baikushev’s pine (also known as the Baikushev white fir, or the Baikushev fir) is a coniferous tree from the species Bosnian pine (Pinus heldreichii) situated in Pirin, southwestern Bulgaria. It is named after its discoverer, forest ranger Kostadin Baikushev, and is located near the Banderitsa refuge. With an approximate age of about 1,300 years, Baikushev’s pine is one of the oldest trees in the World and is a contemporary of Bulgaria’s founder, Khan Asparukh.

The General Grant tree is the largest giant sequoia (Sequoiadendron giganteum) in the General Grant Grove section of Kings Canyon National Park in California and the second largest tree in the World. The tree was named in 1867 after Ulysses S. Grant, Union Army general and the 18th President of the United States (1869–1877). President Calvin Coolidge proclaimed it the “Nation’s Christmas Tree” on April 28, 1926.

Hyperion is the name of a coast redwood (Sequoia sempervirens) in Northern California that was measured at 115.61 m (379.3 ft), which ranks it as the World’s tallest known living tree. The tree was found in a remote area of Redwood National and State Parks purchased in 1978. The tree is estimated to contain 530 m3 (18,600 cu ft) of wood and to be roughly 700–800 years old.

Stratosphere Giant was once considered the tallest tree in the World. It was discovered in July 2000 in Humboldt Redwoods State Park, measuring 112.34 metres (368.6 ft) tall. The tree has continued to grow and measured 113.11 m (371.1 ft) in 2010. It is a specimen of the species Sequoia sempervirens, the Coast Redwood. It is surrounded by a large number of trees of almost equal size.