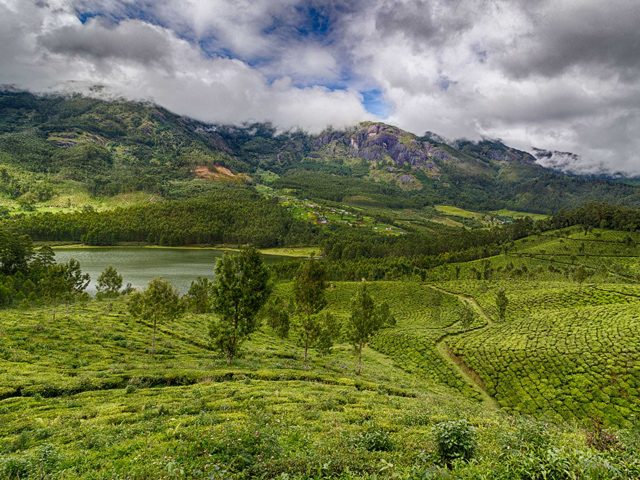 The Kovalam is a beach town by the Arabian Sea in Thiruvananthapuram city, Kerala, India, located around 16 km from the city center. There are a large number of beach resorts in and around Kovalam. The sea port of Vizhinjam is about 3 km away and famous for its special varieties of fish, old Hindu temples, big churches and a mosque. Kovalam was among the most prominent tourist spots in India during the hippy era.

Cradled by the undulating plantation hills of Munnar, and not far away from the Anamudi Peak is Mattupetty. Situated in the famous hill town of Munnar, Mattupetty located 13 km from Munnar is situated at a height of 1700 m, and is a delight for nature lovers. Mattupetty offers many fascinating sights to relish. Besides the lush green tea plantations, and the rolling grasslands, the Shola forests in and around Mattupetty are ideal for trekking and are habitat to a variety of birds.

Alappuzha also known as Alleppey, is a city in Alappuzha District of Kerala state of southern India. This town is considered to be the oldest planned town in this region and the lighthouse built on the coast of the town is the first of its kind along the Arabian coast. Alleppey is an important tourist destination in India. The Backwaters of Alleppey are the most popular tourist attraction in Kerala. A houseboat cruise in these backwaters is a delightful experience.

Wayanad District in the north-east of Kerala, India, was formed on November 1, 1980 as the 12th district by carving out areas from Kozhikode and Kannur districts. It is set high on the Western Ghats with altitudes ranging from 700 to 2100 m. Wayanad district stands on the southern tip of the Deccan plateau and its chief glory is the majestic rugged terrain of the Western Ghats, with lofty ridges interspersed with dense forest, tangled jungles and deep valleys. It is the least populous district in Kerala.

Munnar is a hill station on the Western Ghats, a range of mountains situated in the Idukki district of the Indian state of Kerala. This green hill station is surrounded by the country’s highest tea gardens. Layers and layers of tea estates, mountain mist, waterfalls and wildlife sanctuaries make Munnar almost surrealistically beautiful. The lofty mountain ranges with misty peaks, sprawling tea estates and serene climate provides a quite and peaceful resort.

The village of Kumarakom is a cluster of little islands on the Vembanad Lake, and is part of the Kuttanad region. An enchanting backwater destination, Kumarakom offers visitors many other leisure options. Boating and fishing facilities are available at the Taj Garden Retreat, a sprawling old bungalow-turned-resort. Waterscapes, the backwater resort of the Kerala Tourism Development Corporation has independent cottages built on stilts, set amidst coconut groves and panoramic view of the backwaters.

Ashtamudi Lake in the Kollam District of Kerala, India, is the second largest and deepest wetland ecosystem, a palm-shaped large water body, next only to the Vembanad estuary ecosystem of the state. The lake is also called the gateway to the backwaters of Kerala. Ashtamudi Wetland was included in the list of wetlands of international importance, as defined by the Ramsar Convention for the conservation and sustainable utilization of wetlands.

Thekkady is the location of the Periyar National Park, which is an important tourist attraction in the Kerala state of India. The sanctuary is famous for its dense evergreen, semi-evergreen, moist deciduous forests and savanna grass lands. It is home to herds of elephants, sambar, tigers, gaur, lion-tailed Macaques and Nilgiri Langurs. Thekkady is considered as a heaven for natural spices such as black pepper, cardamom, cinnamon, nutmeg, nutmace, ginger, and clove.

Athirappalli is a scenic combination of forests and little streams. Falling from a height of 80 feet, this is one of the largest waterfalls in the state. Many endangered and endemic species of flora and fauna are found in the forests of the Athirapilly-Vazhachal area. This area is the only place in the Western Ghats where four endangered Hornbill species are seen. The Western Ghats is one of the most important biodiversity hot spot in the World.

Varkala is a coastal town and municipality in Thiruvananthapuram district situated in the Indian state of Kerala. Varkala is the only place in southern Kerala where cliffs are found adjacent to the Arabian Sea. These tertiary sedimentary formation cliffs are a unique geological feature on the otherwise flat Kerala coast, and is known among geologists as Varkala Formation and a geological monument as declared by the Geological Survey of India.

10 Great Places for Birdwatching
Ten Great Adventures for 2017
Japan
5 Reasons It Might Be a Good Time to Visit Egypt
Categories: Travel