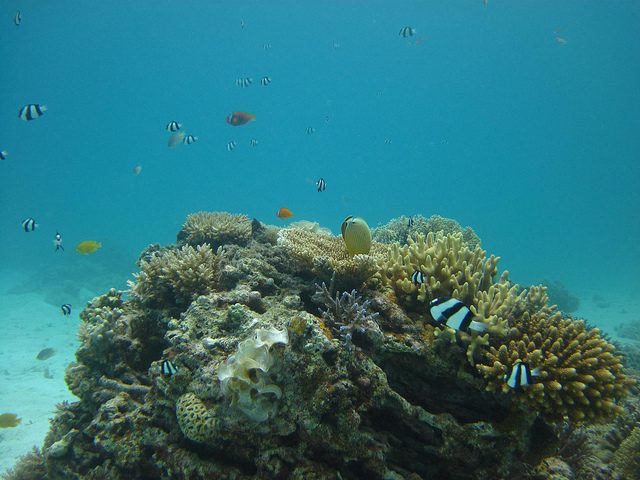 Many of the world’s coral reefs are in danger both from climate change and from over fishing and pollution. Some estimates predict that over 90% of corals will be lost in the Great Barrier Reef in the coming years and that damaged and disappearing reefs will cost the global economy over a Trillion dollars. Diving and snorkeling the reefs is a once in a lifetime experience for many but it should also be kept in mind the things we can do protect them and make sure they survive. Here is our list of the 10 most endangered reefs.

The Great Barrier Reef is the World’s largest coral reef system composed of over 2,900 individual reefs and 900 islands stretching for over 2,300 kilometres over an area of approximately 344,400 square kilometres. The reef is located in the Coral Sea, off the coast of Queensland, Australia. The Great Barrier Reef can be seen from outer space and is the world’s biggest single structure made by living organisms. This reef structure is composed of and built by billions of tiny organisms, known as coral polyps.

Hikkaduwa National Park is one of the three marine national parks in Sri Lanka. The national park contains a fringing coral reef of high degree of biodiversity. Hikkaduwa coral reef is a typical shallow fringing reef with an average depth of around 5 metres (16 ft). The coral reef reduces the coastal erosion and forms a natural breakwater. The coast of the national park extends four km. Generally the coast is narrow, ranging from 5–50 m according to the climatic conditions of the year. Scuba diving is a popular recreation here.

The Florida Keys National Marine Sanctuary is a U.S. National Marine Sanctuary in the Florida Keys. It includes the Florida Reef, the only barrier coral reef in North America and the third-largest coral barrier reef in the World. It also has extensive mangrove forest and seagrass fields. The marine sanctuary includes a 2,800 square nautical mile area surrounding the Keys and reaching into the Atlantic Ocean, Florida Bay and the Gulf of Mexico.

Apo Reef is a coral reef system in the Philippines situated on the western waters of Occidental Mindoro province in the Mindoro Strait. Encompassing 34 square kilometres, it is the World’s second-largest contiguous coral reef system and the largest in the country. The reef and its surrounding waters are protected areas in the country administered as the Apo Reef Natural Park (ARNP). It is one of the best known and most popular dive sites in the country.

The Tubbataha Reefs Natural Park (Bahurang Tubbataha) is a protected area of the Philippines located in the middle of Sulu Sea. The marine and bird sanctuary consists of two huge atolls (named the North Atoll and South Atoll) and the smaller Jessie Beazley Reef covering a total area of 97,030 hectares. It is located 150 kilometres southeast of Puerto Princesa City, the capital of Palawan province. The site is an excellent example of a pristine coral reef with a spectacular 100-m perpendicular wall, extensive lagoons and two coral islands.

The Arrecifes de Cozumel National Park is off the coast of the island of Cozumel in the state of Quintana Roo, Mexico. The Cozumel reef system is part of the Mesoamerican Barrier Reef System, the second largest coral reef system in the World. Even though almost the entire island of Cozumel is surrounded by coral reefs, the park only encompasses the reefs on the south side of the island. It begins just south of the International Pier and continues down and around Punta Sur and up just a small portion of the east side of the island.

The Belize Barrier Reef is a series of coral reefs straddling the coast of Belize, roughly 300 meters (980 ft) offshore in the north and 40 kilometers (25 mi) in the south within the country limits. It is Belize’s top tourist destination, popular for scuba diving and snorkeling and attracting almost half of its 260,000 visitors. It is also vital to the country’s fishing industry. In addition to its barrier reef, it also boasts three distinct Caribbean atolls: Turneffe Atoll, Glover’s Reef and Lighthouse Reef. Lighthouse Reef is the most easterly diving area in Belize.

Reunion Island is located near the eastern coast of Madagascar in the Indian Ocean. Its coral reef covers a concentrated part of the western littoral. The coral reef is located between St Leu and St Gilles. Coral reefs are among the most densely populated marine environments. The Reunion Island coral reef is a rich habitat for soft and hard corals that provide food and habitat for an abundance of fish and shellfish. The corals feed on a diet of plankton and algae which they catch with their tentacles.