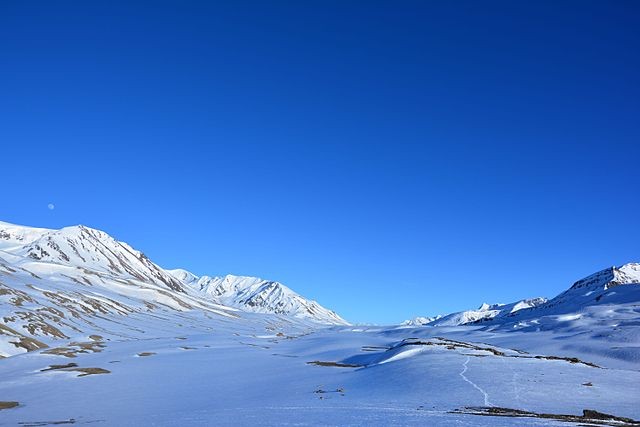 The Indian Himalayas have some fantastic trekking opportunities. Here is a look at some of the best options in the state of Himachal Pradesh which lies almost in the center of the Himalayas. If you are thinking of planning a trek here the best time to go is from March to May and after the monsoon in October and November. Some of our favorite treks on the list include Pin Parvati Pass which basically traverses the Himalayas from South to North and traverses an amazing array of mountain environments. The trek to Kinnaur Kailash attracts numerous pilgrims but the dramatic mountain scenery is reason enough to visit. Finally, if you want to combine mountains and culture try the Malana Trek to the ancient and solitary village of the same name. Here is a look at all the treks that made our top ten.

Hamta Pass is a moderate trek, originating in Prini village of Manali and ends at Chhatru. Connecting The Kullu Valley with Lahol valley it allows you to explore some of the various landscapes of the Himalayas.
Location: Kullu to Lahaul Spiti (H.P)
Best Season: June – October
Max. Elevation: 4200m
Duration of the Trek: 5 days

Triund is a ridge that overlooks the Dhauladhars. The ridge elevation is between 2,810 and 2,875 metres. It has the perfect view of the dhauladhar mountains on one side and kangra valley on the other. The trail is rocky and cut in steps at some places.
Location: Dharamshala
Best Season: August – October
Max. Elevation: 2875m
Duration of the Trek: 2 days

Indrahar Pass is a mountain pass in the Dhauladhar range of the Himalayas. The trekking trail to Indrahar pass starts from Galu Devi temple above Dharamkot village near Dharamsala and passes through the camping ground of Triund, Ilaqua/Laka Got, and Lahesh Caves.
Location: McLeod Ganj
Best Season: May – October
Max. Elevation: 4342m
Duration of the Trek: 5 days

Bhrigu Lake is located to the east of Rohtang Pass and is around 6 kilometres from Gulaba village. It can be reached by trekking either from the Vashishth temple, which is famous for its hot water springs, which is close to the town of Manali or from Gulaba village.
Location: Kullu
Best Season: Mid-May until November, except the monsoon
Max. Elevation: 4325m
Duration of the Trek: 3 days

The trek to Beas Kund is one of the most beautiful short trek in Himachal Pradesh. From Solang Nallah, the route winds through the famous Solang Valley.
Location: Manali
Grade: Easy
Max. Elevation: 3690m
Best Season: April – November
Duration of the Trek: 4 days

Pin Parvati Pass is a popular trekking route today though still rarely visited. This trans-Himalayan trek is the shortest route between the Kullu and Spiti Valleys. Once over the Pin-Parvati pass, there is a complete change in landscape – the mountain slopes immediately turn barren and rugged.
Location: Kullu
Grade: Moderate
Max. Elevation: 5319m
Best Season: July – September
Duration of the Trek: 13 days

Chandra Taal is located in the Himalayas. It comes under the Spiti area of Lahaul and Spiti district of Himachal Pradesh. Chandra Taal is a popular trekking and camping destination, attracting a number of travellers every year.
Location: Spiti Valley
Best Season: April – October
Max. Elevation: 4890m
Duration of the Trek: 3 days

The Kinnaur Kailash (locally known as Kinner Kailash) is a mountain in the Kinnaur district of the Indian state Himachal Pradesh. The Kinnaur Kailash has a height of 6050 meters and is considered as sacred by both Hindu and Buddhist Kinnauris.
Location: Kinnaur
Best Season: May – September
Max. Elevation: 5242m
Duration of the Trek: 10 days

Malana is an ancient Indian village in the state of Himachal Pradesh. This solitary village in the Malana Nala, a side valley of the Parvati Valley to the north-east of Kullu Valley, is isolated from the rest of the world.
Location: Malana Village
Best Season: April – October
Max. Elevation: 3029m
Duration of the Trek: 4 days