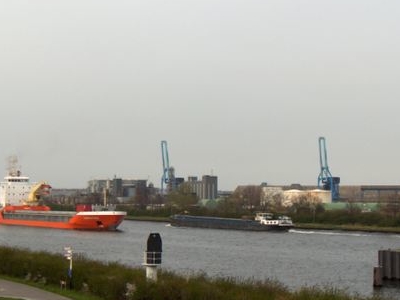 The Ghent-Terneuzen Canal  also known as the "Sea Canal" (Zeekanaal) is a canal linking Ghent in Belgium to the port of Terneuzen on the Westerschelde (Scheldt) estuary in the Netherlands, thereby providing the former with better access to the sea.

The canal was constructed between 1823 and 1827 on the initiative of the Dutch King: Belgium (as it subsequently became) and the Netherlands had become a united country under the terms agreed at the Congress of Vienna. After Belgium broke away in 1830, traffic to and from Belgium was blocked by the Dutch until 1841.

Between 1870 and 1885 the canal was enlarged to a depth of six and a half meters at its centre, and to a width of 17 meters at its base and 68 meters at the surface level: bridges were rebuilt accordingly along the Belgian sector.

The famous Cluysen - Ter Donck Regatta was organised here for many decades (1888-1954) and during the 1913 Expo of Ghent the European Rowing Championships took place on the canal.

Here's the our members favorite photos of "Canals in Ghent". Upload your photo of Ghent-Terneuzen Canal!

Going to Ghent-Terneuzen Canal? Get answers from our friendly locals

Olga Maele is the only Touristlink member to visit Ghent-Terneuzen Canal. Have you been here? Click here to save it.