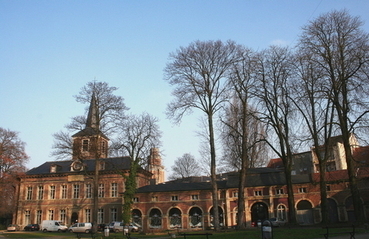 Forest Abbey (French: Abbaye de Forest) is a Benedictine Abbey founded in 1105, beside a creek, a tributary of the Seine, southwes of the city of Brussels, Belgium in the commune of Forest. The abbots of Affligem, which had been the ecclesiastical owners of the parish since the bishop of Cambrai ceded it to them in 1105, decided to build a priory for women in Forest, Forest Abbey.

The first abbess of the Forest priory was named in 1239. Also in the 13th century, the Romanesque church of Saint Denis was rebuilt in the newer Gothic style. The neighbouring abbatial church was rebuilt in the 15th century. The abbey was abolished in 1796 and sold the following year. The buildings that survived the dismantling are now a cultural center for seminars, banquets and exhibitions belonging to the Brussels commune of Forest. The Abbey and the site were classified as a historical monument in 1994.

Here's the our members favorite photos of "Churches in Brussels". Upload your photo of Forest Abbey!

Going to Forest Abbey? Get answers from our friendly locals