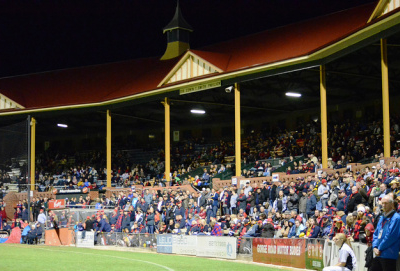 Norwood Oval (currently known as Coopers Stadium due to sponsorship from the Adelaide based Coopers Brewery) is a suburban oval in the western end of Norwood, an inner eastern suburb of Adelaide, South Australia. Norwood, Payneham & St Peters Council own the Oval but rent it, for a peppercorn rental, to the Norwood Football Club. It has been used for a variety of sporting and community events including baseball, soccer, rugby league and American football, but its main use is for Australian rules football. It is the home ground for the Norwood Football Club ("The Redlegs") in the South Australian National Football League (SANFL).

The Oval has a capacity of 22,000 people, with grandstand seating for up to 3,900. The ground record crowd was set in 1971 when 20,280 turned up to watch an SANFL match between Norwood and their traditional SANFL rivals Port Adelaide. Norwood Oval's dimensions are 165m x 110m making it the narrowest ground in use in the SANFL. In the 1950s the Norwood Football Club received permission from the then City of Kensington & Norwood to install six light towers at the oval. This allowed Norwood to host not only night football matches but also night baseball. Regular night SANFL night series matches were played at the oval until 1984 when all night games were transferred to the SANFL's own Football Park. The light towers were upgraded at Norwood Oval in 2010. The six light towers that had been in place since the 1950s were replaced with 4 light towers of television standard positioned at the 'corners' of the oval. Nowrood Oval was also the scene of Norwood's triumph over East Perth in the 1977 National Football League grand final.

Baseball:
Norwood has also hosted Baseball since 1951 with the South Australian Baseball team being tenants until 1988. Between 1951 and 1988 Norwood Oval hosted the Claxton Shield competition on six occasions (1951, 1956, 1961, 1966, 1971, 1976 and 1981) with the winners being NSW (1951), Victoria (1956 and 1981) and SA (1961, `66, `71 and `76). The original Australian Baseball League (ABL) started in 1989 with Adelaide represented by the Adelaide Giants. The ABL ran from 1989 until it folded in 1999 with the Giants playing all of their home games at Norwood Oval with most being under lights. During their time in the ABL the Giants were affiliated, as were every other team in the league, with a team from Major League Baseball. In a massive coup the Giants managed to get themselves affiliated with the 1988 World Series champions the Los Angeles Dodgers with the team receiving 3-4 'import players' a season from the Dodgers Minor League system to compliment their array of 'local' talent. Unfortunately during the ABL the Giants never made the ABL's championship series.

Following the collapse of the ABL after 1999 and the short lived International Baseball League of Australia (IBLA) which ran from 1999-2000 until the 2002 the Claxton Shield was revived in 2003 with South Australia playing their games at the Thebarton Oval before moving back to Norwood Oval in 2009. In August 2010 it was announced that there would be a new Australian Baseball League and that Coopers Stadium would be the home ground of Adelaide Bite, the team representing Adelaide in the ABL.

As of February 2012 Norwood Oval's field dimensions for baseball are:

Here's the our members favorite photos of "Stadiums in Adelaide". Upload your photo of Norwood Oval!

Going to Norwood Oval? Get answers from our friendly locals