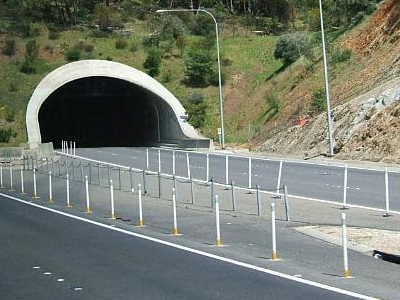 The Heysen Tunnels are twin tube road tunnels which carry the Adelaide-Crafers Highway under Eagle On The Hill in the Mount Lofty Ranges in South Australia. The tunnels were excavated using a tunnelling machine normally used in heavy-duty mining operations which tunnelled through 500 metres of rock for each tunnel at an average rate of 3 metres per day. The tunnels were completed in 1998 and officially opened in May 2000. Each tunnel carries 3 lanes of traffic.

Here's the our members favorite photos of "Tunnels in Adelaide". Upload your photo of Heysen Tunnels!

Going to Heysen Tunnels? Get answers from our friendly locals