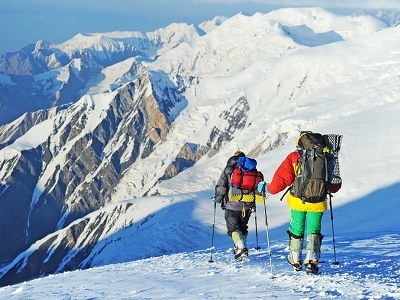 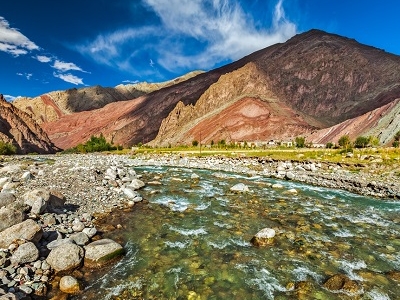 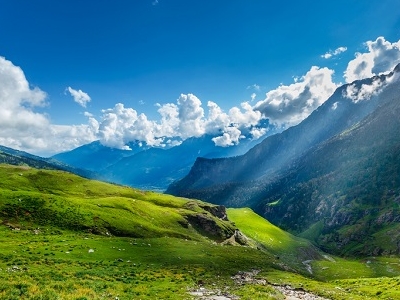 The Himalayas, also Himalaya, is a mountain range in Asia separating the plains of the Indian subcontinent from the Tibetan Plateau. The Himalayan range is home to some the planet's highest peaks, including the highest, Mount Everest. The Himalayas include over a hundred mountains exceeding 7,200 metres (23,600 ft) in height. By contrast, the highest peak outside Asia -  Aconcagua, in the Andes -  is 6,961 metres (22,838 ft) tall.

The Himalayan range, which consists of three parallel sub-ranges, abuts or crosses five countries: Bhutan, India, Nepal, People's Republic of China, and Pakistan, with the first three countries having sovereignty over most of the range.[3] The Himalayas are bordered on the northwest by the Karakoram and Hindu Kush ranges, on the north by the Tibetan Plateau, and on the south by the Indo-Gangetic Plain. Some of the world's major rivers, the Indus, the Ganges, and the Tsangpo-Brahmaputra, rise in the Himalayas, and their combined drainage basin is home to some 600 million people. The Himalayas have profoundly shaped the cultures of South Asia; many Himalayan peaks are sacred in both Hinduism and Buddhism.

Lifted by the subduction of the Indian tectonic plate under the Eurasian Plate, the Himalayan range runs, west-northwest to east-southeast, in an arc 2,400 kilometres (1,500 mi) long. Its western anchor, Nanga Parbat, lies just south of the northernmost bend of Indus river, its eastern anchor, Namcha Barwa, just west of the great bend of the Tsangpo river. The range varies in width from 400 kilometres (250 mi) in the west to 150 kilometres (93 mi) in the east.

Geology:
The Himalayas are among the youngest mountain ranges on the planet and consist mostly of uplifted sedimentary and metamorphic rock. According to the modern theory of plate tectonics, their formation is a result of a continental collision or orogeny along the convergent boundary between the Indo-Australian Plate and the Eurasian Plate. This is referred to as a fold mountain.

Hydrology:
The Himalayan range encompasses about 15,000 glaciers, which store about 12,000 km3 (3000 cubic miles) of fresh water. Its glaciers include the Gangotri and Yamunotri (Uttarakhand) and Khumbu glaciers (Mount Everest region), and Zemu (Sikkim).

Lakes:
The Himalaya region is dotted with hundreds of lakes. Most lakes are found at altitudes of less than 5,000 m, with the size of the lakes diminishing with altitude. Pangong Tso, which is spread across the border between India and China, and Yamdrok Tso, located in central Tibet, are amongst the largest with surface areas of 700 km², and 638 km², respectively. Other notable lakes include Gurudogmar lake in North Sikkim, Tsongmo lake, near the Indo-China border in Sikkim, and Tilicho lake in Nepal in the Annapurna massif. The mountain lakes are known to geographers as tarns if they are caused by glacial activity. Tarns are found mostly in the upper reaches of the Himalaya, above 5,500 metres.

Here's the our members favorite photos of "Mountain Ranges in India". Upload your photo of Himalayas!

Going to Himalayas? Get answers from our friendly locals

Get in touch with 171 Touristlink members who want to visit Himalayas or with Harihar Adhikari, Amara Travels and 128 others who already have been here.