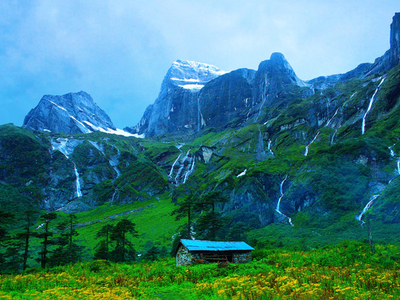 The Eastern Himalayan alpine shrub and meadows is a montane grasslands and shrublands ecoregion of Bhutan, China, India, Myanmar, and Nepal, which lies between the tree line and snow line in the eastern portion of the Himalaya Range.

The Eastern Himalayan alpine shrub and meadows covers an area of 121,300 square kilometres (46,800 sq mi), extending along the north and south faces of the Himalaya Range from the Kali Gandaki Gorge in central Nepal eastwards through Tibet and India's Sikkim state, Bhutan, India's Arunachal Pradesh state, and northernmost Myanmar.

The alpine shrub and meadows lie between approximately 4,000 and 5,500 metres (13,100 and 18,000 ft) elevation. Permanent ice and snow lies above 5,500 metres (18,000 ft). The Eastern Himalayan subalpine conifer forests lie below 3,000 metres (9,800 ft) along the southern slopes of the range, from Central Nepal to Bhutan. The Northeastern Himalayan subalpine conifer forests lie south of the range in Arunachal Pradesh, extending north of the range into the lower valley of the Brahmaputra River and its tributaries.

The Northern Triangle temperate forests lie to the south of the alpine shrub and meadows in northern Myanmar, and the Nujiang Langcang Gorge alpine conifer and mixed forests lie to the east in the gorges of the upper Irrawaddy and Salween rivers.The Yarlung Tsangpo arid steppe lies in the upper Brahmaputra Valley of Tibet, north of the Eastern Himalayan alpine shrub and meadows.
Flora:
Alpine shrublands, characterized by rhododendrons, predominate at lower elevations, close to the treeline. The rhododendron flora of the ecoregion is quite varied, with species composition changing as one moves from west to east along the range.
Fauna:
Large mammals include the Snow Leopard, Bharal or Himalayan Blue Sheep, Himalayan Tahr,takin etc.

Here's the our members favorite photos of "Nature Reserves in Asia". Upload your photo of Eastern Himalayan Alpine Shrub and Meadows!