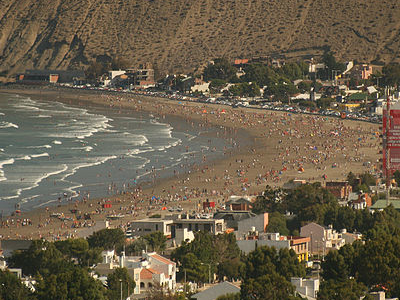 Chubut, a province in the southern part of Argentina situated between the 42nd parallel south (forming the border with the Río Negro Province) and the 46th parallel south (bordering Santa Cruz Province), the Andes range separating Argentina from Chile, and the Atlantic ocean. The province's name derives from the Tehuelche word chupat, meaning "transparent," their description of the Chubut River.

The largest city, with 180,000 inhabitants, is Comodoro Rivadavia in the south of the province. The administrative capital is Rawson (40,000). Other important cities are Puerto Madryn, Trelew, Esquel and Sarmiento. Gaiman is a cultural and demographic centre of the region known as "Y Wladfa" in which Welsh-Argentines are concentrated. The 25,000 Welsh speakers in the Chubut region are concentrated in the original Welsh settlements of Trelew and Trevelin.

Here's the our members favorite photos of "States/Regions in Argentina". Upload your photo of Chubut!

Going to Chubut? Get answers from our friendly locals