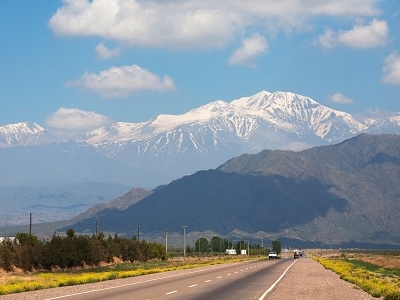 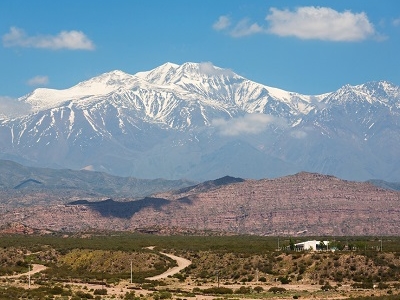 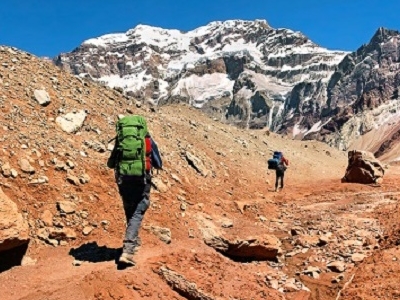 Aconcagua is the highest mountain in the Americas at 6,959 m (22,841 ft). It is located in the Andes mountain range, in the Argentine province of Mendoza and it lies 112 kilometres (70 mi) west by north of its capital, the city of Mendoza. The summit is also located about 5 kilometres from San Juan Province and 15 kilometres from the international border with Chile. Aconcagua is the highest peak in both the Western and Southern Hemispheres. It is one of the Seven Summits.

Aconcagua is bounded by the Valle de las Vacas to the north and east and the Valle de los Horcones Inferior to the West and South. The mountain and its surroundings are part of the Aconcagua Provincial Park. The mountain has a number of glaciers. The largest glacier is the Ventisquero Horcones Inferior at about 10 km long, which descends from the south face to about 3600 m altitude near the Confluencia camp.Two other large glacier systems are the Ventisquero de las Vacas Sur and Glaciar Este/Ventisquero Relinchos system at about 5 km long. However, the most well-known is the north-eastern or Polish Glacier, a common route of ascent.

Climbing:
In mountaineering terms, Aconcagua is technically an easy mountain if approached from the north, via the normal route. Aconcagua is arguably the highest non-technical mountain in the World, since the northern route does not absolutely require ropes, axes, and pins. Although the effects of altitude are severe (atmospheric pressure is 40% of sea-level at the summit), the use of supplemental oxygen is not required. Altitude sickness will affect most climbers to some extent, depending on the degree of acclimatization.

Popular Culture:
The mountain has a cameo in a 1942 Disney cartoon called "Pedro".The cartoon stars an anthropomorphic small airplane named Pedro who is compelled to make an air mail run over the Andes and has a near-disastrous encounter with Aconcagua. The mountain later appeared in an illustration used in a retelling of the story in a Disney anthology book. It was also mentioned as the correct answer to a quiz show question in the 1969 Disney film, The Computer Wore Tennis Shoes.

Here's the our members favorite photos of "Peaks or Summits in Argentina". Upload your photo of Aconcagua!

Going to Aconcagua? Get answers from our friendly locals

Get in touch with 25 Touristlink members who want to visit Aconcagua or with Holiday Zone, Rodrigo Nova and 17 others who already have been here.

Peaks or Summits in Argentina

Peaks or Summits in South America