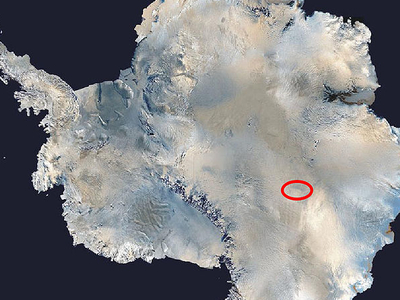 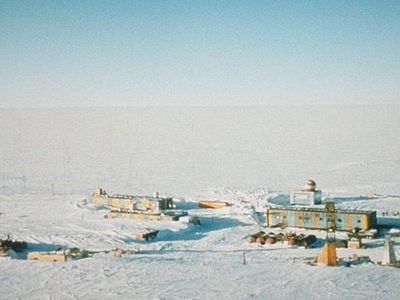 Lake Vostok (Russian: озеро Восток, Ozero Vostok, lit. "Lake East") is the largest of Antarctica's more than 140 sub-glacial lakes. Lake Vostok is located at the southern Pole of Cold, beneath Russia's Vostok Station under the surface of the central East Antarctic Ice Sheet, which is at 3,488 metres (11,444 ft) above mean sea level. The surface of this fresh water lake is approximately 4,000 m (13,100 ft) under the surface of the ice, which places it at approximately 500 m (1,600 ft) below sea level.

The lake is named after Vostok Station, which in turn is named after the Vostok (Восток), a sloop-of-war, which mean "East" in Russian. The existence of a subglacial lake in the Vostok region was first suggested by Russian geographer Andrey Kapitsa based on seismic soundings made during the Soviet Antarctic Expeditions in 1959 and 1964 to measure the thickness of the ice sheet. The continued research by Russian and British scientists led by 1993 to the final confirmation of the existence of the lake by J.P. Ridley using ERS-1 laser altimetry.
The lake was drilled into by Russian scientists in 2012. The overlying ice provides a continuous paleoclimatic record of 400,000 years, although the lake water itself may have been isolated for 15 to 25 million years. On 5 February 2012, a team of Russian scientists claimed to have completed the longest ever ice core of 3,768 m (12,400 ft) and pierced the ice shield to the surface of the lake.

Samples of the freshly frozen water in the ice well are expected to be collected at the end of 2012 when the new Antarctic summer starts. The Russian team plans to send a robot into the lake to collect water samples and sediments from the bottom. Unusual forms of life could be found in the lake's liquid layer, an ecosystem sealed off below the ice for millions of years, conditions which could resemble those of the hypothesized ice-covered ocean of Jupiter's moon Europa.
Geological History:
Africa separated from Antarctica around 160 million years ago, followed by the Indian subcontinent, in the early Cretaceous (about 125 million years ago). About 65 million years ago, Antarctica (then connected to Australia) still had a tropical to subtropical climate, complete with marsupial fauna and an extensive temperate rainforest.The Lake Vostok basin is a small (50 km / 30 mi wide) tectonic feature within the overall setting of a several hundred kilometer wide continental collision zone between the Gamburtsev Mountain Range, a subglacial mountain range and the Dome C region.The lake water is cradled on a bed of sediments 70 meters (230 ft) thick, offering the possibility that they contain a unique record of the climate and life in Antarctica before the ice cap formed.
Traits:
The lake water is estimated to have been sealed off under the thick ice sheet about 15 million years ago.Initially, it was thought that the same water had made up the lake since the time of its formation, giving a residence time in the order of one million years. Later research by Robin Bell and Michael Studinger from the Lamont–Doherty Earth Observatory of Columbia University suggested that the water of the lake is continually freezing and being carried away by the motion of the Antarctic ice sheet, while being replaced by water melting from other parts of the ice sheet in these high pressure conditions. This resulted in an estimate that the entire volume of the lake is replaced every 13,300 years—its effective mean residence time.
The coldest temperature ever observed on Earth, −89 °C (−128 °F), was recorded at Vostok Station on 21 July 1983.The average water temperature is calculated to be around −3 °C (27 °F); it remains liquid below the normal freezing point because of high pressure from the weight of the ice above it.[29] Geothermal heat from the Earth's interior may warm the bottom of the lake.The ice sheet itself insulates the lake from cold temperatures on the surface.
Lake Vostok is an oligotrophic extreme environment, one that is expected to be supersaturated with nitrogen and oxygen,measuring 2.5 liters of nitrogen and oxygen per 1 kilogram (2.2 lb) of water,that is 50 times higher than those typically found in ordinary freshwater lakes on Earth. The sheer weight and pressure around 345,60 bar (5143 psi) of the continental ice cap on top of Lake Vostok is believed to contribute to the high gas concentration.Besides dissolving in the water, oxygen and other gases are trapped in a type of structure called a clathrate. In clathrate structures, gases are enclosed in an icy cage and look like packed snow. These structures form at the high-pressure depths of Lake Vostok and would become unstable if brought to the surface.
In April 2005, German, Russian, and Japanese researchers found that the lake has tides.Depending on the position of the Sun and the Moon, the surface of the lake rises about 12 millimeters. The lake is under complete darkness, under 354,60 bar (5143 psi) of pressure, and expected to be rich in oxygen, so there is speculation that any organisms inhabiting the lake could have evolved in a manner unique to this environment.There is a 1 microtesla magnetic anomaly on the east coast of the lake, spanning 105 km (65 mi) by 75 km (47 mi). Researchers hypothesize that the anomaly may be caused by a thinning of Earth's crust in that location.
Living Hydrogenophilus thermoluteolus micro-organisms have been found in Lake Vostok's deep ice core drillings; they are an extant surface-dwelling species.This suggests the presence of a deep biosphere utilizing a geothermal system of the bedrock encircling the subglacial lake. There is optimism that microbial life in the lake may be possible despite high pressure, constant cold, low nutrient input, potentially high oxygen concentration and an absence of sunlight.Jupiter's moon Europa and Saturn's moon Enceladus may also harbor lakes or oceans below a thick crust of ice. Any confirmation of life in Lake Vostok could strengthen the prospect for the presence of life on icy moons.

Here's the our members favorite photos of "Lakes in Antarctica". Upload your photo of Lake Vostok!

Going to Lake Vostok? Get answers from our friendly locals