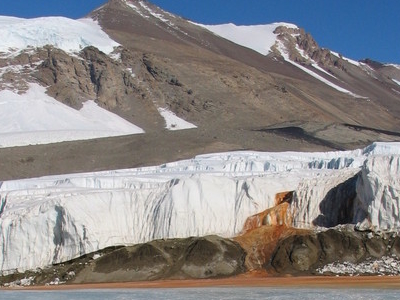 Blood Falls is an outflow of an iron oxide-tainted plume of saltwater, flowing from the tongue of the Taylor Glacier onto the ice-covered surface of West Lake Bonney in the Taylor Valley of the McMurdo Dry Valleys in Victoria Land, East Antarctica.Iron-rich hypersaline water sporadically emerges from small fissures in the ice cascades. The saltwater source is a subglacial pool of unknown size overlain by about 400 m of ice at several km from its tiny outlet at Blood Falls.

The reddish deposit was found in 1911 by the Australian geologist Griffith Taylor, who first explored the valley that bears his name. The Antarctica pioneers first attributed the red color to red algae, but later it was proven to be due only to iron oxides.

Poorly soluble hydrous ferric oxides are deposited at the surface of ice after the ferrous ions present in the unfrozen saltwater are oxidized in contact with atmospheric oxygen. The more soluble ferrous ions initially are dissolved in old seawater trapped in an ancient pocket remaining from the Antarctic Ocean when a fjord was isolated by the glacier in its progression during the Miocene period, some 5 million years ago when the sea level was higher than today.