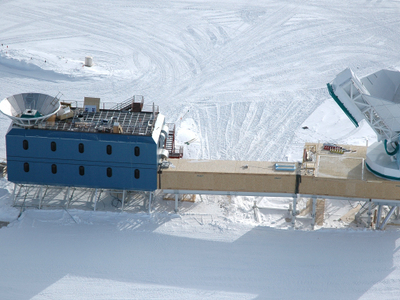 The South Pole Telescope (SPT) is a 10 metre (394 in) diameter telescope located at the Amundsen-Scott South Pole Station, Antarctica. The telescope is designed for observations in the microwave, millimeter-wave, and submillimeter-wave regions of the electromagnetic spectrum, with the particular design goal of measuring the faint, diffuse emission from the Cosmic Microwave Background (CMB).The first major survey with the SPT–designed to find distant, massive, clusters of galaxies through their interaction with the CMB, with the goal of constraining the Dark Energy equation of state–was completed in October, 2011. In early 2012, a new camera was installed on the SPT with even greater sensitivity and the capability to measure the polarization of incoming light. This camera is designed to measure the so-called "B-mode" or "curl" component of the polarized CMB, leading to constraints on the mass of the neutrino and the energy scale of inflation.

The Telescope
The telescope is a 10 meter (394 in) off-axis Gregorian telescope in an altazimuth mount (at the poles, an altazimuth mount is effectively identical to an equatorial mount). It was designed to allow a large field of view (about 1 square degree) while minimizing systematic uncertainties from ground spill-over and scattering off the telescope optics. The surface of the telescope mirror is smooth down to roughly 25 micrometers (less than one one-thousandth of an inch), which allows sub-millimeter wavelength observations. The secondary mirror is cooled to 10 K, and metal mesh filters block excess high frequency radiation to keep the thermal loading on the camera down. A key advantage of the SPT observing strategy is that the entire telescope is scanned, so the beam does not move relative to the telescope mirrors. The fast scanning of the telescope and its large field of view makes SPT efficient at surveying large areas of sky, which is required to achieve the science goals of the SPT cluster survey and CMB polarization measurements.

The SPT-SZ camera
The first camera installed on the SPT contained a 960-element bolometer array of superconducting transition edge sensors (TES), which made it one of the largest TES bolometer arrays ever built. The focal plane for this camera (referred to as the SPT-SZ camera because it was designed to conduct a survey of galaxy clusters through their Sunyaev-Zel'dovich Effect signature) was split into six pie-shaped wedges, each with 160 detectors. These wedges observed at three different frequencies: 95 GHz, 150 GHz, and 220 GHz. The modularity of the focal plane allowed it to be broken into many different frequency configurations. For the majority of the life of the camera, the SPT-SZ focal plane had one wedge at 95 GHz, four at 150 GHz, and one at 220 GHz.

The SPTpol camera
The camera currently installed on the SPT–also designed with superconducting TES arrays–is even more sensitive than the SPT-SZ camera and, crucially, has the ability to measure the polarization of the incoming light (hence the name SPTpol - South Pole Telescope POLarimeter). The 780 polarization-sensitive pixels (each with two separate TES bolometers, one sensitive to each linear polarization) are divided between observing frequencies of 90 GHz and 150 GHz, and pixels at the two frequencies are designed with different detector architectures. The 150 GHz pixels are corrugated-feedhorn-coupled TES polarimeters fabricated in monolithic arrays at the National Institute of Standards and Technology. The 90 GHz pixels are individually packaged dual-polarization absorber-coupled polarimeters developed at Argonne National Laboratory. The 90 GHz pixels are coupled to the telescope optics through individually machined contoured feedhorns.

First light was achieved with the SPTpol camera on January 27, 2012. The camera is currently in a commissioning phase and will begin survey observations in earnest around the time of polar sunset, 2012. The first crew of SPTpol winterovers are Cynthia Chiang and Nicholas Huang.

Here's the our members favorite photos of "Observatories in Antarctica". Upload your photo of South Pole Telescope!

Going to South Pole Telescope? Get answers from our friendly locals